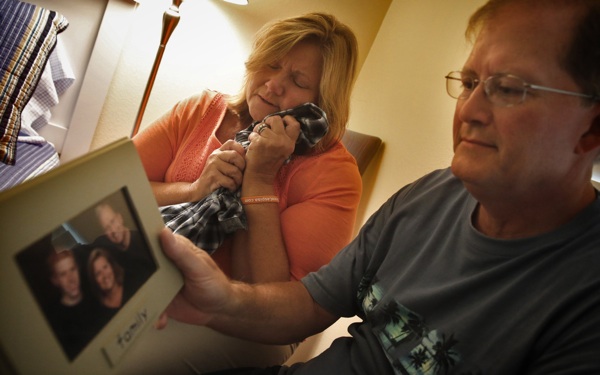 Karen and Mike Laspisa sit in their son's bedroom in with clothes and pictures of Bryce.
(Credit: Don Bartletti/Los Angeles Times/MCT)

LOS ANGELES — For Karen and Mike Laspisa, every birthday, every holiday, every month is one more without Bryce.

On a recent weekend they reached another milestone — one year since their son, a Naperville, Ill., Central High School graduate, went missing in California.

“Mike and I, we live this every day, and how does someone just vanish?” Karen Laspisa said. “But I know he’s not the only one because we’ve been thrown into a world of people who have loved ones missing.”

Laspisa last spoke to her then 19-year-old son about 2 a.m. Aug. 30, 2013, as Bryce was driving from Sierra College near Sacramento to his family’s home in the Southern California city of Laguna Niguel. Bryce called her to say he was tired and was going to sleep in his car.

Six hours later, the highway patrol showed up on the family’s doorstep to report they had found Bryce’s 2003 Toyota Highlander lying on its side unoccupied near Castaic Lake about 90 miles away. His cellphone, laptop and wallet were still inside.

Rescue workers performed an extensive search of the lake and the surrounding area, but never found Bryce.

Family, friends and strangers marked the one- and six-month milestones with vigils in California and Naperville, but Laspisa wasn’t sure she could get through another. Instead, to mark the one-year anniversary, the Laspisa family is asking people to perform a random act of kindness and to hand out a card with information about Bryce.

“That’s the purpose to be able to continue spreading the awareness about Bryce still being missing and Bryce has a very kind heart,” Laspisa said.

Before moving to California for retirement, the couple raised Bryce in the Chicago suburbs, and he attended Naperville schools.

Bryce’s high school friend Katie Krebs, now a student at Illinois State University, said she misses the way Bryce could make her smile no matter what else was happening.

“It’s crazy,” she said of the one-year mark. “I didn’t think it would be this long, and I really don’t even know what to think anymore. I just wish he would be found.”

The Laspisas are still trying to wrap their heads around Bryce’s disappearance and keep replaying their many unanswered questions. Did he intentionally run away? Laspisa acknowledges it’s possible, but said it seems unlikely. She said she and her husband had a good relationship with Bryce, and he hadn’t been in trouble.

They hired a private investigator and a forensic analyst who scoured Bryce’s laptop and phone, but could not find evidence he was planning to run away.

Did someone harm him? The case remains in the hands of homicide detectives with the Los Angeles County Sheriff’s Department. The detectives working the case could not be reached.

Did he suffer memory loss in the crash and wander off? Tips continue to come in via a Find Bryce Laspisa Facebook page with more than 15,000 followers. There have been reported sightings in Washington, Oregon, California and Nevada, but so far none has led to Bryce.

“We have little pockets of what we call our little angels out there doing their own thing and keeping an eye out for Bryce and spreading the word and giving out fliers,” Laspisa said.

But because of the time that has passed and the difficulty of the terrain around the lake, there are no ongoing organized search efforts.

Daily life for the Laspisas has become what they call “our new normal.” They check the Facebook page set up to find Bryce multiple times a day and otherwise try to keep busy with volunteer work and seeing friends.

“We live without him in our lives every day, and we wear our (‘Find Bryce Laspisa’) bracelets and say a prayer every night, but we have to take care of ourselves,” Laspisa said. “That was very difficult the first couple months.”

Despite the time that has passed, Laspisa said she continues to hold out hope her son is alive, since his body has not been found.

“The other part is you keep hope in your heart because you love your child and have wonderful memories of him and with him and want to create more,” she said.

Bryce’s former coach with the Naperville Baseball Association, William Quinn, echoed Krebs’ sentiments about Bryce’s uplifting nature and said he was like an assistant coach.

“He was full of energy,” Quinn recalled. “He was a go-getter. He would go through and motivate the team.”

This summer Quinn retired Bryce’s No. 10 jersey and hung it on the fence at each game as a way to honor Bryce and to remind people he is still missing.

Laspisa said the family is grateful to Quinn and the many others who have reached out in some way.

“A year later and we still have people looking for him and sending pictures in and sending us support,” she said. “So that in itself, we are so appreciative.”

Bryce is described as white with red hair and blue eyes. He is just under 5 feet 11 inches tall, weighs 170 pounds and has a tattoo of the Taurus bull’s head zodiac sign with Roman numerals on his left shoulder. He was last seen wearing white cargo shorts, a blue-and-white checkered shirt and white and red Nike shoes.

Laspisa asks that anyone who believes they may have seen Bryce send the family a photo if possible at findbrycelaspisa@gmail.com. They are offering a $5,000 reward for information that leads to him. They also have set up a tip line at 949-292-4400, and the L.A. County Sheriff’s Department can be reached at 323-890-5500. Cards for those participating in the random act of kindness campaign can be found at facebook.com/findbrycelaspisa.