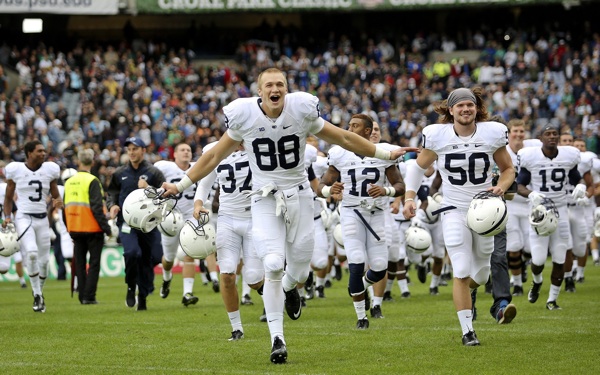 The NCAA Executive Committee on Monday announced an immediate lifting of the Penn State football team's bowl probation and said it would restore the Nittany Lions' full complement of 85 scholarships in 2015-16.

The action endorses recommendations made in a quarterly report by former Sen. George Mitchell, who was hired as Penn State's athletics integrity monitor in the aftermath of the Jerry Sandusky child sex abuse scandal.

Penn State had some of its scholarship losses reinstated last year.

"Penn State has made remarkable progress over the past year,” said Harris Pastides, a member of the NCAA Division I Board of Directors and president of the University of South Carolina. “The board members and I believe the Executive Committee’s decision is the right one. It allows both the university and the association to continue to move toward a common goal of ensuring that educating, nurturing and protecting young people is a top priority.”

In July 2012, NCAA President Mark Emmert hit Penn State with extraordinary penalties in the wake of the shocking Sandusky revelations.

Penn State had two years remaining on its original bowl ban. Penn State is 2-0 this season after wins over Central Florida and Akron. The Nittany Lions play their Big Ten opener at Rutgers on Saturday.

Football
Mahomes’ new deal is a record, and the Chiefs have been right about him at every step
400 views

Football
NFC preview: How the Eagles stack up against the rest of the conference
1,117 views

Football
Littleton needs to be on the money for Rams
1,100 views