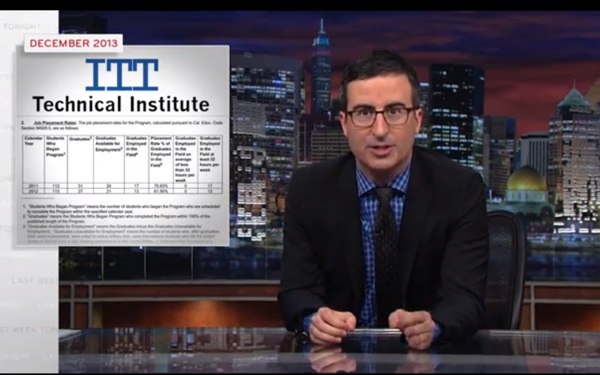 "Student debt is like HPV. If you go to college, you are most certainly going to get it. And if you do, it will follow you for the rest of your life."

This very, very true statement came from John Oliver, who tackled a topic that will probably never go away: student debt.

During his "Last Week Tonight with John Oliver" show on HBO Sunday night, the comedian shared some staggering statistics about student loan debt in the United States ("Student debt in the U.S. is now bigger than credit cards and auto loans and second only to mortgages"). Peppered with sarcasm, wit and funny one-liners, Oliver highlighted the country's problem with student loan debt and its higher education system, noting how states slashed colleges' budgets and the incredibly long class waiting lists.

However, Oliver makes it clear that one of the biggest drivers of student debt is for-profit schools such as ITT Tech, University of Phoenix and Everest College.

"For-profit schools account for nearly a third of all student loans," said Oliver, "despite just having 13 percent of our country's students. That is way out of proportion."

When talking about ITT, Oliver explained that out of the 115 students enrolled in one ITT engineering program, only 27 graduated, and only 13 ended up working in the field they studied.

"Everyone else would have genuinely been better off studying engineering at Hogwarts, because at least that way they’d have a f*ing owl to show for it," he said as the audience laughed.

Well, just for the record: we're still waiting for our Hogwarts letter.

Watch the rest of Oliver's segment on student debt above.