Milla Jovoich: Is No Shrinking Violet 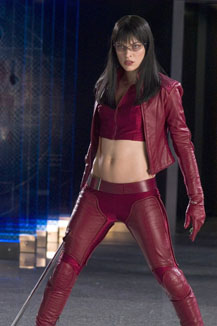 Even though Milla Jovovich played an ultimate being in The Fifth Element and a zombie slayer in the Resident Evil films, it’s her character Violet in Kurt Wimmer’s Ultraviolet that finally fulfilled one of her long-cherished fantasies.

"Violet was kind of all my dreams of being a ninja my whole life, like coming true in this moment," says the actress, whose character has superhuman strength and reflexes thanks to a highly contagious blood disease. "I think Violet is very much like some mythological character I had in my head."

In the film’s futuristic world, these infected "hemophages" have been forced underground, only to wage guerilla warfare on their pure human enemies. Handy with guns as well as swords, Violet commits acts of violence with fluid, martial arts-inspired moves. While Jovovich happily underwent months of training to perform the tightly choreographed action sequences, she was also drawn to her character’s provocative image, which included color-changing hair, skintight pants and midriff-baring tops.

"She was really crazy, sexy, which is what I wanted because I’ve never really played a part that is that sophisticated on film before," she explains. "All the action movies I’ve done in the past have been kind of funny parts, but not sexy per se or not in a typical way. I wanted to be a more straight ahead, sophisticated hot chick."

Jovovich, who’s modeled for over 20 years and launched her own clothing line with design partner Carmen Hawk, appreciated the film’s futuristic fashions that had a comic book sensibility.

"Everybody was dressed in these super crazy outfits. It looked like some bad Eurotrash bar: all these men in these kind of like raincoat material in different color jackets," says the actress. "And then me with that weird kind of crazy, stripper-friendly – sort of like old Christina Aguilera of before. But I find with modeling and with acting, a lot of things look ridiculous in real life, but then on film, something translates. It’s really that movie magic thing that happens."

Besides the flashy looks and action, Jovovich also valued the more tender side of the story in which Violet risks her life to defend Six (Cameron Bright), a mysterious boy whose secret could spell doom or salvation for the hemophages.

"She’s actually fighting for a cause against this totalitarian government. And through this, she meets this sick child and has to make the choice whether to save his life or continue with her crazy mission," says Jovovich. "There’s something really special about that relationship, which I related to as well because I’m getting to that place where I’m going to think about kids and family.

"I think it would be great for someone like Violet to be a role model," she adds. "I think women really have to do martial arts because they don’t need to be strong. It’s really about being fast and using other people’s strength against them. It’s fun, so you don’t feel the time go by. It’s not like the Stairmaster."

Ultraviolet is currently in theatres.
Article posted on 3/6/2006
This article has been viewed 2537 times.