Jonathan Tropper Offers This Is Where I Leave You 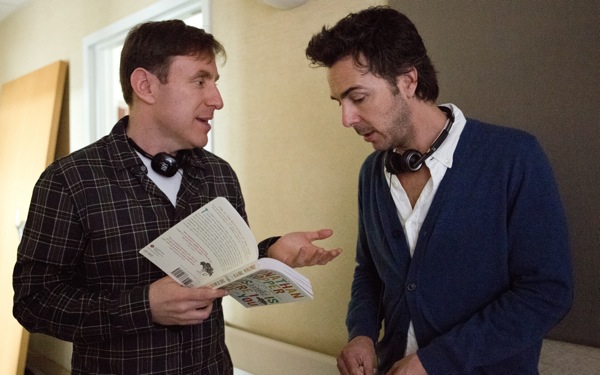 On a recent afternoon, author Jonathan Tropper sat down in a Brentwood restaurant and surveyed the beverage options. "How honest do you want me to be?" he asked. "Sometimes I become dangerously honest with a cocktail." After a moment of careful deliberation, he settled on a Diet Coke. "It feels a little early," he explained somewhat apologetically.

As readers of his novels know, Tropper, 44, can be dangerously honest no matter what he's drinking, laying bare the flaws and foibles of his suburban middle-class characters as they fumble through marriage, careers, midlife crises and family squabbles. Given his talent for blending cutting wit with tear-jerking poignancy, it's no surprise Hollywood has come calling.

On Sept. 19, director Shawn Levy's adaptation of Tropper's 2009 bestseller This Is Where I Leave You will hit theaters. With a screenplay by Tropper and a starry ensemble cast that includes Jason Bateman, Tina Fey, Jane Fonda and Adam Driver, the movie chronicles an emotionally tumultuous week in the life of four combative siblings as they return home after the death of their father to sit shiva, the Jewish ritual of mourning.

As Tropper sees it, This Is Where I Leave You follows in the tradition of such filmmakers as James L. Brooks, Cameron Crowe and Woody Allen, mining comedy and drama from one nuclear family's Fukushima-level meltdown.

"The stuff that made me want to be a screenwriter was that warts-and-all, slightly heightened but still grounded storytelling about family and relationships," said Tropper, a divorced father of three. "When those movies work — like Terms of Endearment, Jerry Maguire, Annie Hall — they're the ones you never forget."

That type of midrange, adult-oriented dramedy has become something of an endangered species in Hollywood in recent years. Still, from early in his career, Tropper, who grew up in the Riverdale section of New York and lives in Westchester County, found plenty of interest in bringing his work to the screen. Three of his first four novels — The Book of Joe (2004), How to Talk to a Widower (2005) and Everything Changes (2007) — were optioned within a week of publication.

Watching from the outside as others struggled without success to get those movies made, Tropper decided to try his own hand at screenwriting. "I always wanted to take a stab at it, but writing novels is what came naturally to me," he said. "I felt like I needed to get there and see if maybe I could make it work."

Tropper's first paid screenwriting job was a contemporary reimagining of the classic 1950 Jimmy Stewart movie Harvey, about a man whose best friend is an invisible rabbit. Though Steven Spielberg was briefly attached to direct, that project eventually stalled.

Given the passionate fan base for This Is Where I Leave You, though, interest in a movie version was high from the start. Himself an ardent fan of Tropper's work, Levy — whose previous movies, like Night at the Museum, have skewed younger and lighter — insisted on keeping the film as faithful to the novel as possible.

Tropper's script attracted an impressive array of actors, each of whom was willing to work for a reduced fee to help keep the budget under $20 million.

"I just thought it was funny and also very human and real," said Fonda, who plays the family's matriarch, whose sexual openness mortifies her offspring. "I related to my character. Her boundaries are kind of porous, and I'm sort of that way myself. My children would testify to that."

Tropper is optimistic that the film will connect with moviegoers. "I'm pretty confident that there's an audience out there for it," he said. "I think fans of the book are going to love it. I'm hoping we can carve out a studio niche for this type of movie again."

Either way, Tropper's work in Hollywood shows no sign of slowing. The Cinemax action-drama series Banshee, which he co-created, is going into its third season. He is working with Levy on an adaptation of Steve Martin's novel The Pleasure of My Company and an original father-son dramedy called Kodachrome. And Paramount is developing his most recent novel, 2012's One Last Thing Before I Go, for a film to be produced by J.J. Abrams.

Still, even as he hears the siren call of movies and television, Tropper says long-form fiction will always be his home. "All of this exists because I'm a novelist," he said. "My feeling is that books and movies are two separate things. People always ask, 'Are you worried they'll ruin your book?' The book is here. They can't change a word of it."