7 iPhone 6 & 6 Plus Features We're Most Excited About! 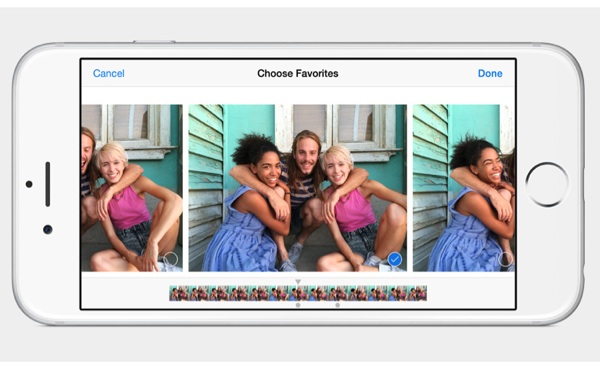 On Tuesday, Sept. 9, Apple CEO Tim Cook took to the stage during the big Apple event and dished all of the juicy features we can expect with the iPhone 6 and iPhone 6 Plus, which is on sale Sept. 19.

Here are some of our favorite features included in the new iPhone:

1. Design
The iPhone 6 has a continuous, seamless design with no distinct edges. It's super, super smooth.

It will be even easier to fit this bad boy in your pocket or clutch when you're going out.

2. Apple Pay
Speaking of fitting things in your clutch, Apple Pay might help you make more room be getting rid of your wallet someday.

Working with American Express, MasterCard and Visa, this feature is coming to the U.S. in October and will make purchasing through your apps easier, more secure and private. You can check out with one tap without filling out long forms, entering your credit card number, etc.

Bonus: You can use Apple Pay at Disney World and Disney stores! When the phones launch, McDonald’s, Subway and Whole Foods will also accept Apple Pay.

Apple Pay is great for those who hate carrying around credit cards (or tend to lose them).

4. Wi-Fi Calling
Remember the last time you tried to make a phone call but you had poor reception YET somehow amazing Wi-Fi. Well, Wi-Fi calling will let you make high-quality calls when cell conditions are poor. NICE!

5. Better Camera & Photos
Yay for amazing Instagram photos! The new iPhone will have Focus Pixels, which used to be found only in professional DSLR cameras. AND, your photos will be clearer because this sensor will help your phones focus faster and better.

Also, when you're taking a "groupie," the iPhone's burst mode will detect smiles and blinks, and recommend the best picture.

Speaking of burst mode, the new phone can take up to 10 photos per second--that's a whole lot of selfies at once!

We bet you'll be using the hashtag #NoFilterNeeded more often with the new iPhone.

6. Video Fun!
iPhones basically replaced traditional cameras, so it's only a matter of time that they do the same to traditional videos. In fact, that time may be now.

The new video camera lets you capture slow motion at 240 frames per second, and videos will also appear more stable and in focus.

7. New Cases
Both of the iPhones come in gold, silver and space gray, but there are new Apple-designed silicone cases in six colors for the iPhone 6. There are also leather cases for iPhone 6 and 6 Plus in five colors.

Check out Apple.com for more information about the new iPhone and other surprises revealed during the event!