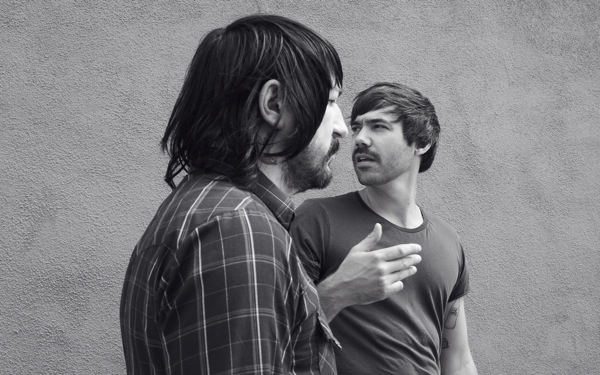 It’s hard to believe that it has been nearly 10 years since Death from Above 1979 unleashed their signature dance-punk sound that would make 2004’s full-length debut You’re a Woman, I’m a Machine such a groundbreaking success. Ever since then, it hasn’t exactly been smooth sailing for the Toronto-based duo.

Less than two years after finishing You’re a Woman, I’m a Machine, Sebastien Grainger (drums, vocals) and Jesse F. Keeler (bass, synths, backing vocals) went their separate ways, citing both musical and stylistic differences for the band’s breakup. Yet, it would take five years before Grainger and Keeler — also of MSTRKRFT fame — would even speak to each other again, let alone play music together.

So, while their reunion in 2011 certainly excited old fans and converted others, it wasn’t until this past July that DFA 1979 finally released new music, enlisting “Trainwreck 1979” to serve as the first single on The Physical World, which released Tuesday. With Keeler’s gut-rumbling bass line paving the way for Grainger’s melodic yelping and thunderous drumming, it’s a track that employs all of the DFA 1979 essentials their admirers should be used to hearing by now.

But for as strong of a first offering as “Trainwreck 1979” is, especially when you consider how long it has taken Grainger and Keeler to get back in the studio, the rest of The Physical World is worthy of just as much commendation. In fact, it deserves more. After all, the 11-song LP has all the makings to be considered one of the best albums of 2014. From top to bottom, it’s loaded with head-banging, yet danceable punk riffs that make DFA 1979’s sound so unique, even almost a decade later. Just trying to pick out the record’s top tracks can be a difficult endeavor in and of itself.

Of course, you won’t find a much better one-two punch on The Physical World than the thrashing “Right On, Frankenstein” and the subsequent “Virgins,” on which Grainger croons, “Where have all the virgins gone?” to open the song’s chorus. Still, what may be most impressive about DFA 1979’s follow-up to You’re a Woman, I’m a Machine is the fact that there are no throwaways here to speak of — only some choice cuts that stand out slightly more than others (see “Crystal Ball,” “Government Trash” and the album’s title track). And with the kind of chops that Grainger and Keeler unload on The Physical World, DFA 1979 supporters really can’t ask for much more.

As electrifying as DFA 1979’s songs can be both in the studio and in a live setting, they’re definitely not for everyone. Though punk has never been a genre that this music writer has taken a great liking to, there is something about DFA 1979’s stripped-down style that makes them as intriguing as any two-piece out there right now. Despite plenty of outside pressure to make a new album (Grainger actually told NME in June that the media and the band’s fans were the impetus for writing The Physical World in the first place), DFA 1979 has proven once again to the (physical) world that it only takes two talented dudes to create some seriously bone-crushing, blood-pumping tunes.

There will be many DFA 1979 fans who will have a difficult time deciding whether they prefer You’re a Woman, I’m a Machine or The Physical World more. At the end of the day, that’s not a bad problem to have. Instead, it should serve as further evidence that DFA 1979’s sound can stand the test of time. If Grainger and Keeler decide to never make another album together again, they can at least know the music has never suffered as a result of their own personal strife.

The Physical World is available now.