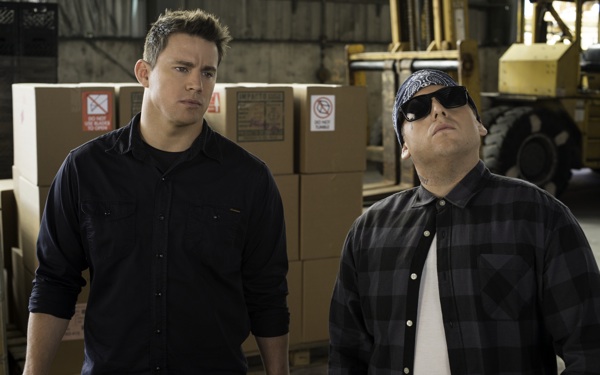 Get excited, because the rumor is Channing Tatum and Jonah Hill are reuniting as the misfit cop duo in Sony's upcoming 23 Jump Street!

Deadline reports Rodney Rothman is set to write the script (he was also one of the writers on 22 Jump Street), but it is unclear if Phil Lord and Christopher Miller will return to direct 23 Jump Street. However, the two are producers on the third film, along with Tatum, Hill and Neal Moritz.

So, now that we've established there will most likely be a 23 Jump Street, it's time to decide where Jenko (Tatum) and Schmidt (Hill) should go undercover next. If you recall, 22 Jump Street's credits featured numerous ideas of where the duo should be in the next movies (23 Jump Street, 24..., 25...., 26...etc.).

In case any of the writers, you know, want our opinion, we're more than happy to offer up some ideas for the third film, especially if they plan on sticking with the school/college theme.

Here are our ideas:

OPTION 1
Med School
Mission: The guys go undercover to figure out who's been concocting and distributing a super "study" drug that's even more effective (and deadly) than Adderall. However, Jenko wants to prove he's smarter than he looks, so he takes the drug and unfortunately becomes addicted. Now, it's up to Schmidt to not only find out who's behind the drug, but to also save his friend from going downhill.

OPTION 2
Law School
Mission: A law professor/attorney takes on a high-profile murder case, but police suspect that the professor may actually be the real murderer. So, Jenko and Schmidt must go undercover as students at Harvard Law to get into the professor's class and in on the case. Things get messy (and of course, funny), as they struggle to figure who they can trust and who they can't.

Think Legally Blonde-meets-"How to Get Away with Murder."

OPTION 3
Study Abroad Program
Mission: The boys are headed to France! However, it's not all fun and games; Jenko and Schmidt must find out how dozens of students are being sucked into a foreign spying network (hey, this happens in real life. Just ask the FBI.) Oh yes, there's romance, expensive wine, cheese and the beautiful Eiffel Tower. But, there's also some serious danger too.