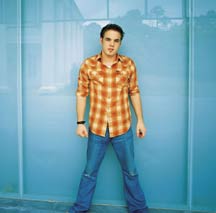 It’s not often that a truly unique and gifted voice comes along. Marc Broussard’s is the kind you either have or you don’t; a voice that’s way down deep; the kind that’s bred only around the Mississippi, most likely tracing its roots to those old black draymen who announced the steamboats with their portentous voices back in Mark Twain’s day.

Coming from a small town near the lazy river, Broussard’s birthright entitles him to this kind of voice, but there’s just one thing — he is not an old black man. Described by himself and others as a "white boy singing soul music," his 22-year-old, blue-eyed façade betrays the weather-beaten throaty voice that often elicits comparisons to Otis Redding and Marvin Gaye.

In response to his listeners’ amazement, Broussard humbly explains how he feels about the "white-boy" tag. "I’ve always gotten tagged as the ‘white boy who sings soul,’" Broussard admits. "It doesn’t matter to me; that’s just what it is. I don’t care what you call me, as long as you call me!"

And there isn’t a shortage of callers for Broussard these days. Having just finished up touring with the Dave Matthews Band, he’s currently supporting singer-songwriter Gavin McGraw on a series of East Coast dates and will soon make his way to the West Coast in support of his new album, Carencro — named after his home town.

The singer’s Southern roots have played a formidable role in shaping his music and who he is. "I’m sure that some people could take a good guess that I was from Louisiana after they heard my music," says Broussard, "but I don’t think that the average listener is just gonna say, ‘Oh, that kid’s from Louisiana.’ It’s just the love and the overall positive vibe of my records and my live show, I think, that is very derivative of my upbringing in Southern Louisiana."

Broussard’s father and Louisiana Hall of Fame guitarist Ted Broussard lent a hand on "Home." Marc explains how the song developed on the road as the father and son made their way home after touring together.

"We got up to drive back to Louisiana, and Pops started hummin’ this little tune. He looks over at me and says, ‘Marc, whatcha think of this?’ (singing) ‘Goin’ down the road, goin’ nowhere / Guitar packed in the trunk.’ I was like, ‘This is gonna fly!’

"Then I looked on the side of the road and I saw my marker 112, and I said, (singing) ‘Somewhere ’round my marker 112 / Papa started hummin’ the funk.’ We just gave birth to a really great song. [It’s] probably the most ‘Louisiana song’ I’ve ever written."

Broussard also sings about love on Carencro, such as on "Where You Are," an upbeat pop song already released to radio, and the ultra sexy "The Beauty of Who You Are," in which he croons about "the space on the back of your neck." "Rocksteady," a feel-good, mid-tempo song more in the vein of John Mayer, is about nothing more complex than sharing good times.

Although Broussard’s themes and lyrics are varied, the blue-eyed balladeer says that honesty is the unifying foundation of his work. "The underlying theme is just always about sharing my soul with my audience, says Broussard, "You know, just putting a very real sound out there."

Carenco is currently available. Marc Broussard will be appearing on "The Tonight Show with Jay Leno" on Sept. 8. For more information, visit marcbroussard.com.

Interviews
How a trans indie-rock star made the record of their life, with the help of some new housemates
1,396 views

Interviews
Boys will be Baby Boys in the latest spinoff album from Hippo Campus
1,205 views