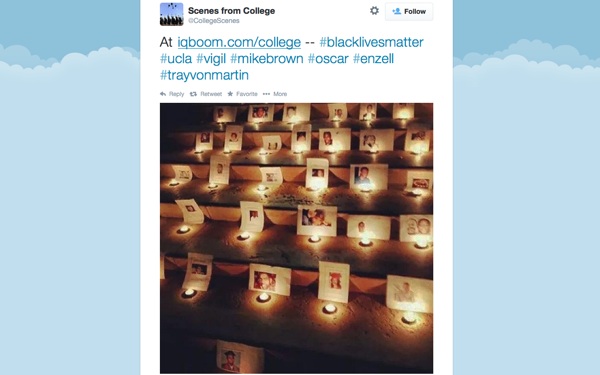 Organized by the UCLA Black Law Students Association (the same group that had its posters ripped down after black law students appeared on a video and talked about the law school's lack of diversity), the event attracted about 40 law students who carried pictures of the unarmed victims and lit candles.

"All of [the victims] were failed by the injustice system,” a second-year law student told the paper.

Ferguson (Mo.) Police Officer Darren Wilson, a white man, shot and killed unarmed black teenager Brown on Aug. 9. What followed included mass protests and outrage in Ferguson and across the nation. Wilson has not been charged with Brown's death yet, despite the fact community activists and local clergy have called for Wilson's arrest.

At the UCLA vigil, people talked about police departments' racial profiling. "Police look to instill fear in us. (Racial profiling) is a subtle violence," said one Los Angeles resident who is black.

Read the full story on The Daily Bruin.