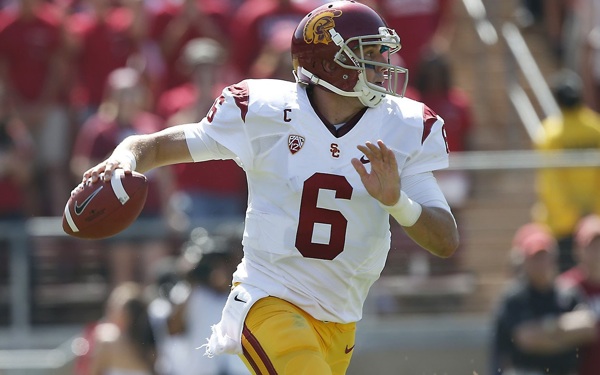 As in two victories.

Kessler’s performance in the Trojans’ 13-10 victory against Stanford did not compare statistically to his game against Fresno State.

But Kessler is not complaining.

The junior from Bakersfield has not had a pass intercepted.

“I pride myself on not turning the ball over,” Kessler said Tuesday as the Trojans began preparations for Saturday’s nonconference game at Boston College.

Two weeks ago, he completed 25 of 37 passes for a career-best 394 yards and four touchdowns against Fresno State. He was 15 for 22 for 135 yards against Stanford.

The 135 yards was Kessler’s fewest since he became the full-time starter in the third game last season.

Coach Steve Sarkisian described Kessler’s performance as “gutsy “and said he “probably could have leaned on Cody more than we did.”

Kessler said that if he passed for only 20 yards and the Trojans won a game, “that’s fine with me.”

“I’m not worried about stats,” he said. “The biggest result for me is the win-loss record, and the stats will come.”

Last season, Kessler started the first two games against Hawaii and Washington State but Max Wittek played the second half of both games.

His first game as the full-time starter came against Boston College. Kessler completed 15 of 17 passes for 237 yards and two touchdowns in 35-7 victory.

“My main focus is getting the ball to the right guy and winning football games,” he said.

Sophomore linebacker Michael Hutchings will start in place of Hayes Pullard, who must sit out the first half against Boston College because he was ejected for targeting in the second half against Stanford.

Pullard can warm up with the Trojans but must remain in the locker room for the first half, a Pac-12 spokesperson said.

Freshman Olajuwon Tucker will back up Hutchings and junior Anthony Sarao also could slide into that spot if necessary.

Senior linebacker Lamar Dawson is still working through his recovery from 2013 knee injury and will be re-evaluated next week, Sarkisian said.

Defensive lineman Leonard Williams, who played through an ankle injury at Stanford, did not dress in full gear for practice. He participated in early walkthrough drills but was otherwise sidelined. ... Tailback Tre Madden remained absent from practice because of a toe injury. Sarkisian said the junior might return after the Boston College game. The Trojans have an open date Sept. 20 and play Oregon State on Sept. 27. ... The Trojans will depart for Boston on Thursday, but they won’t be seeing any historic sites on their trip. “They can go on vacation later,” Sarkisian said. “This is a business trip. We’re going there to win the game.”