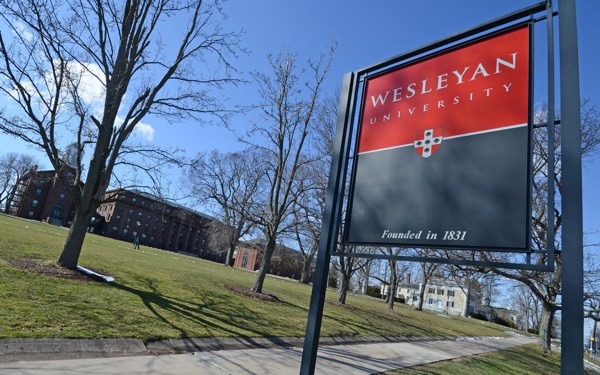 MIDDLETOWN, Conn. — Wesleyan University has barred students from the Beta Theta Pi fraternity house, an order issued after a sophomore was seriously injured Sunday in a fall from a third-story window.

In an email to students and staff Wednesday, university officials said that the house will be off-limits to students effective Monday.

Wesleyan said that the female sophomore, who has not been identified by either the university or Middletown police, fell from the window during a party at the fraternity house. The fraternity has a long history of run-ins with the university, including a lawsuit in which a young woman charged that she was raped by a nonstudent at the house.

“We have lost confidence in the ability of the fraternity members to manage social and residential activities at the house and abide by university policies,” said the email signed by President Michael Roth and Vice President for Student Affairs Michael Whaley. “Wesleyan has an obligation to do what it reasonably can to ensure the safety of every member of the community, including the Beta fraternity members and their guests.”

Also on Wednesday, the national Beta Theta Pi fraternity said that it had suspended the Wesleyan Mu Epsilon chapter, downgrading its status from “probation to suspension.”

“Beta Theta Pi has enjoyed 125 years at Wesleyan, but the chapter has been in the midst of an extensive period of self-renewal and reorganization following several years of challenging behavior,” the national fraternity said in a statement released late Wednesday afternoon. “Moving forward and building positively on that reality, Beta Theta Pi must continue to accept responsibility for its members’ actions that have not lived up to the expectations of the university, community and larger general fraternity.”

The fraternity said that the injured student was attempting to climb onto the roof of the house when she fell.

Wesleyan said that the Beta house will remain off-limits to students for at least the rest of the academic year, but that the school is open to considering a plan from the fraternity on how it would operate in a way that meets expectations for student residential life.

“The decision to prohibit students from using the Beta house is based on the long history of incidents there,” the email from Roth and Whaley said.

The injured student was taken to St. Francis Hospital and Medical Center by helicopter after the fall, and her condition was upgraded to stable condition on Monday, the police department said.

Wesleyan spokeswoman Kate Carlisle said that the school’s action is not a formal sanction against the fraternity, but prohibits students from being at the High Street building under any circumstances because of safety concerns.

Beta Theta Pi’s building is off-campus and privately owned, but is part of the university’s “program housing” system that allows upperclassmen to live off-campus, often grouped by cultural identities or shared interests, with oversight by Wesleyan administration.

Niall Devaney, the local fraternity chapter’s president, could not be reached for comment Wednesday.

Beta Theta Pi’s national leadership said that despite the difficulty of students having to move out of the fraternity house, “(fraternity) undergraduates and alumni remain focused first and foremost on the recovery of the young woman who attempted to climb onto the roof of our chapter house this past weekend.”

Wesleyan’s relationship with Beta and fraternities in general has been strained and complicated in recent years, with two high-profile lawsuits filed against the school alleging rapes at fraternity houses.

One of the lawsuits, which was settled last year, included an allegation that Beta was known as a “rape factory.” In that case, an anonymous student sued the school after she said she was raped by a nonstudent inside the fraternity house. John O’Neill of New York received a 15-month prison sentence in the case.

A lawsuit filed earlier this year by a Wesleyan student alleges that she was raped in a common room at the Psi Upsilon fraternity house while others watched. Wesleyan expelled the alleged assailant.

The student government earlier this year called on the administration to establish coed fraternities as a way to combat sexual assaults. Carlisle said that Roth had studied the fraternity system in the summer and that the board of trustees was expected to take up the discussion this month.

The school has advised students to stay away from the Beta house once before, in 2010, when it said that it could not guarantee their safety on the premises.