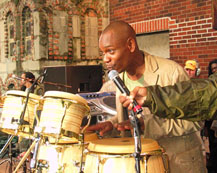 Typically, when somebody throws a block party, they open a few bag of chips, tap a cheap keg and plug in the boom box. But Comedy Central’s one-time $50-million-dollar man Dave Chappelle is far from typical. His idea of a block party is pimping out an entire back alley deep in the Bedford-Stuyvesant neighborhood of Brooklyn and inviting artists like Kanye West, Mos Def and a reunited Fugees to rock the stage all night long.

Michel Gondry (Eternal Sunshine of the Spotless Mind), in his inimitable style, lenses Chappelle’s entire planning process-from dealing with the crazy logistics, to inviting the select party people (including the doling out of Wonka-style golden tickets), to the trip from Chappelle’s hometown in Ohio to the NYC by way of bus. The unstructured, spontaneous style in which Chappelle goes about planning this event is matched nicely by Gondry’s free-wheeling camera moves.

Once in New York, Chappelle acts as part narrator, part tour guide and part hip-hop historian, detailing his love for backpack hip-hop acts like Black Star and the Roots while wandering through the gritty Brooklyn streets and chatting with the locals (including Junior M.A.F.I.A. member and Notorious B.I.G. protégée Li’l Cease).

Many of the film’s high points come as he interacts with the various characters in the community, such as the elder hippie couple who have purchased, live in and are remodeling an elaborate Bed-Stuy parish that, at the time Chappelle toured and commented on it, looked more like a "crack house." Dave also pops into the recreation center that the aforementioned Biggie attended as a small child and cruises through a Salvation Army examining the various tchotchkes for sale and busting out a sweet piano solo.

When not touring the ‘hood, Dave sits down for free-form music and comedy jam sessions with the Roots crew and various emcees. These sessions are classic, probably because, as Chappelle remarks, "All comedians want to be musicians, and all musicians want to be comedians."

On the day the block party is set to go down, word has leaked and people are lined up for blocks to board the busses heading down to the elaborate stage that’s been erected to house the all-star, Chappelle-curated lineup. Gondry creatively interlaces footage from the rehearsal and practice sessions with the concert footage to keep the film from being a straight concert doc and to give you an insider’s view. You’ll see an artist discussing what they want to accomplish on stage and then you’ll get to see exactly how that plays out when they get up in front of the block partiers.

Highlights from the show were various, but all were trumped when Wyclef, Pras and Lauren Hill took the stage to a combination of deafening applause and wide-mouthed gapes. Despite not playing together in years, the Fugees managed to pull off a stellar set, including a jaw-dropping "Killing Me Softly" rendition by L-Boogie.

In essence, the event wasn’t about soul-searching or bond-mending, it was about celebrating a lifestyle and getting people together who live, love and enjoy the art form. That’s what Dave set out to do, and with this block party, that’s exactly the way it all goes down.