By Tiffany Hsu and Chris Kirkham 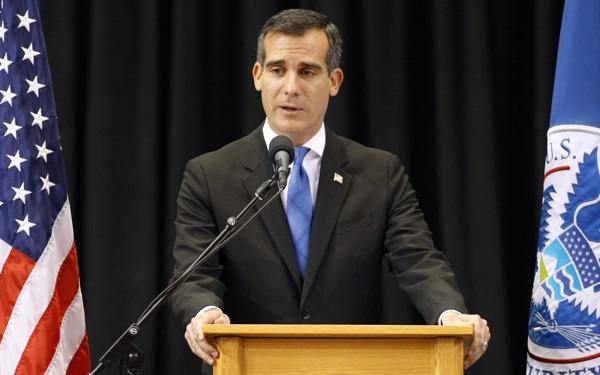 But, while meeting with Los Angeles Times editors and reporters Thursday, Garcetti said his interest in the issue stems “first and foremost” from “a moral imperative.”

“We’re seeing that more and more companies are moving to the minimum wage as their main workers’ wage, and as a result, that has kind of undermined that promise in America that if you work hard, you will be able to support yourself,” the mayor said.

On Labor Day, Garcetti proposed gradually raising the minimum wage in the city from the state minimum of $9 an hour to $10.25 next year, $11.75 in 2016 and $13.25 in 2017. He said sympathetic City Council members are likely to introduce the proposal in a motion in the next few weeks, with the goal of passing the increase around January.

Similar efforts have been made in other California cities, including San Diego and San Francisco. This week  the West Hollywood and Santa Monica councils agreed to take the first steps toward considering a minimum wage increase.

Raising the minimum wage, he said, could alleviate some of the most “devastating” effects of poverty: social problems such as high crime and poor education. Parents are often both working full time and often multiple jobs each, he said.

“How can they sit down for homework with their kids, or get the skills to get higher wages, when they can’t bridge the digital divide because they can’t sit down to learn from their kids how computers work,” Garcetti said.

Asked about businesses – especially manufacturers – fleeing the city for communities with a lower minimum wage, Garcetti said he wasn’t concerned.

“We have more people who would like to be here than we have space for,” he said. “There’s a shortage of industrial land in the city of L.A., and we have good companies that pay well over the minimum wage that we can’t find space for. So if that space is ever to be freed up, I’m not worried that we won’t be able to fill that with higher wage jobs.”

Restaurants employ a plurality of workers who would be affected by a minimum wage increase to $13.25 an hour, according to Michael Reich, a UC Berkeley economist who was part of a team asked by Garcetti to study the feasibility of his proposal.

Reich, who accompanied Garcetti to The Times, said recruiting new employees would be easier for eateries, productivity would increase and absenteeism would decline should the minimum wage rise.

“There are going to be more workers who are going to want to work for you, and they’re going to stay longer,” said Reich, the director of UC Berkeley’s Institute for Research on Labor and Employment. “What I’ve found is that restaurants experience a lot easier time recruiting workers. It reduces the number of vacancies, not jobs.”

Reich has found in a series of recent studies that raising the minimum wage has very little effect on employment or hours for workers.

By comparing adjoining counties with varying minimum wages across the country, he and other researchers have concluded that businesses don’t lay off workers and don’t substantially raise prices because of higher labor costs.

What makes the minimum wage proposal in Los Angeles so different from other cities is how much of the workforce could be affected – 37% of private-sector workers, far higher than 25% to 30% in other cities, Reich said.

“On the spending side, there will be an impact,” he said. “That affects the city as a whole, and it even affects the restaurant industry positively, because some of that money will be spent on local restaurants.”

Minimum wage is a controversial issue, with many studies alleging that increases could threaten employment and crush small businesses.

But Garcetti defended his use of the UC Berkeley findings by saying he wasn’t trying to prove any particular point.

“I wasn’t looking for an ideologue,” he said. “You can find people on global warming who are on the other side of the story, but I think there’s a consensus increasingly.... I trusted that this was the right place to be.”

Local News
Healthy food is hard to come by in South L.A. These 3 activists are changing that
541 views

Local News
California will be ‘a beacon of hope’ for out-of-state abortion seekers, say leaders
475 views

Local News
Caruso donated to politicians opposing abortion in the past. Will that matter to L.A. voters?
384 views