WATCH: This Fraternity's 'Shake It Off' Lip Dub is Everything 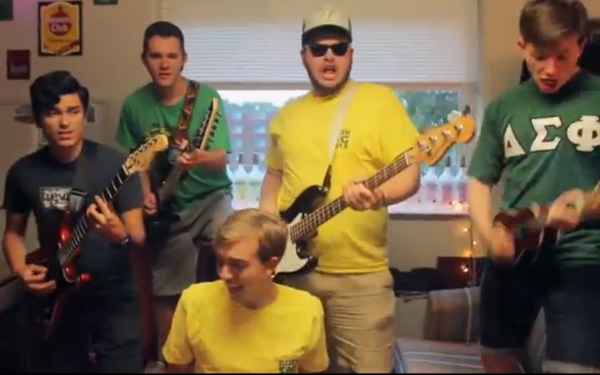 Taylor Swift's "Shake it Off" music video may be cheesy, cringe worthy and one big cultural appropriation, but this video of a bunch of fraternity guys lip syncing the lyrics makes us actually like the song.

The video, which was made by Delta Sigma Phi - Beta Mu fraternity at Transylvania University in Kentucky (via Eonline), begins with a frat bro popping an aspirin in his dorm, battling a hangover and singing, "I stay out too late/Got nothing in my brain/That's what people say, mmm-mmm."

Then, a dapper-looking dude in a sports jacket sings the next lyrics to Swift's song ("I go on too many dates/ But I can't make 'em stay/At least that's what people say, mmm-mmm").

After him, another guy sings a few words, and so on and so on.

It has energy, terrible yet amazing dance moves, and the guys impressively manage to keep their faces straight throughout the entire video.

Since it was uploaded on YouTube Sept. 6, it's been viewed more than 300,00 times and shared on Jezebel, Bustle and Perez Hilton.

Bravo, guys. You've officially made us want to "shake off" that memory of Swift's mess of a video.