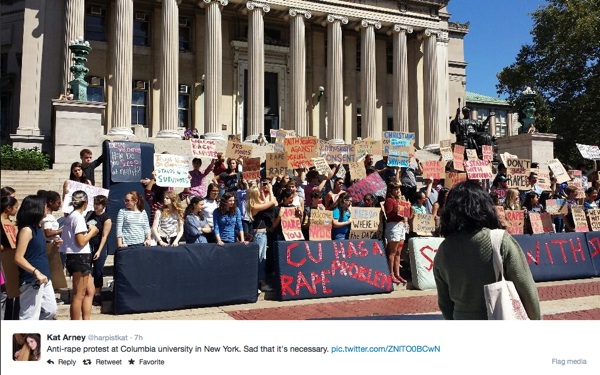 On Friday, Columbia students staged a demonstration on campus to show support for rape victim Emma Sulkowicz, the student whose "Carry the Weight" project has gone viral.

Earlier this month, Campus Circle reported Sulkowicz's plan to carry her mattress around campus until her alleged rapist leaves Columbia.

"I was raped in my own dorm bed," Sulkowicz told the Columbia Daily Spectator. The university did not find her alleged rapist responsible, so she filed a police report against him in May. However, the police reportedly treated her dismissively and showed skepticism.

Many students joined Sulkowicz's protest that afternoon, standing behind several mattresses and holding up signs that read "Stand With Survivors" and "CU Has A Rape Problem." About 50 survivors spoke during the demonstration too (via The Huffington Post).

Sulkowicz refers to her project, which is a part of her senior thesis, as a "endurance performance art piece."

"I feel like I've carried the weight of what happened there with me everywhere since then," she said.

She, along with 23 other survivors, filed a Title IX claim against Columbia University, one of the many colleges that have faced scrutiny over their handling of sexual assault cases.