Kimbra Explains How She Creates Visual Music Through Lyrics, Fashion 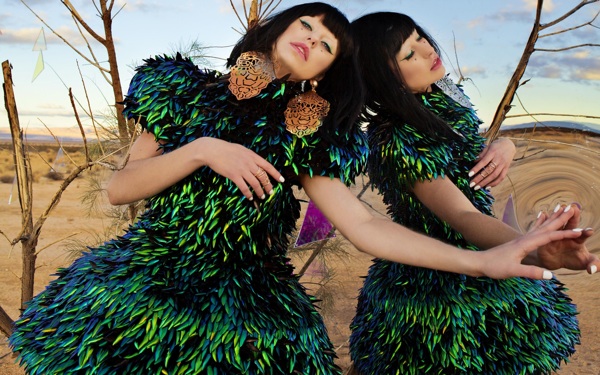 Kimbra Lee Johnson caught the world’s attention when her duo with Gotye, “Somebody I Used to Know,” climbed the music charts all the way to No. 1 on the Billboard Hot 100 in 2012.

Creating music that seems like a collage of different genres and sounds, she is a fresh artist that is far from the almost uniform pop singers of today. One YouTube user summed up her unique sound in the comments section of her “Settle Down” music video: “This music is so.... weird? I'm not saying i dont like it, its... like nothing I've herd b4?”

Two years since her debut Vows, Kimbra released a new album titled The Golden Echo. In a phone interview with the New Zealand native, Campus Circle learned that the album was her moment for imagination. “I feel like on this record, I went to a little portal of experimentation and really kind of went back to my inner child and tried to create a similar place of excitement,” said Kimbra.

But beyond that excitement, her vision for the album is to tell the story of the light and dark experiences we all have on the human journey. “It starts in a place of nostalgia,” she explained. “It gets quite dark towards the middle and kind of finishes in a place of transcendence.”

Kimbra delves a lot deeper with her story through the record's name. One day, while dreaming, the title came to her. “I was lying in bed, and I felt these words ‘golden echo’ just go around and around.”

When she looked into the words, she realized that they were actually the name of a flower, the Narcissus Golden Echo. The title also comes from the name of a poem.

“There’s references in the imagery [of the music] to the story of Narcissus, which is the idea of someone living with constant projections of the self everywhere around them,” she said. “It means the idea of being called outward to listen deeper to the world around you. You can’t hear an echo unless you’re very quiet and unless you listen for it.”

Through a lot more experimentation under the wing of producer Rich Costey (Vampire Weekend, Phantogram, etc.), Kimbra described The Golden Echo as a lot more technical, denser and three-dimensional than Vows. “The palate of sounds is more varied,” she said. “I like to think that when you put your headphones on, it really does explode all around you.”

One of the genres she experimented with was future soul. Influenced by artists such as Bilal and Flying Lotus’ right hand man Thundercat, who are both featured on the album, Kimbra wanted to create songs that fused R&B with indie music. She also noted that her new music has a lot more emphasis on heavier rhythms, especially in her collaborations with Mini Mansions and Michael Shuman from Queens of the Stone Age.

When asked about how she writes music, Kimbra said that her songwriting all starts with sound; she first becomes inspired by a drumbeat and then accompanies it with melodies. When the music allows her to see a visual world, Kimbra writes lyrics that go along with the imagery she imagines.

“If it makes me think of an uncertain situation, I feel cold when I listen to the music,” she said. “I see, like, silvers and blues, and I guess a situation where there’s maybe barren trees.”

Although she doesn’t necessary draw the visual world she envisions, she brings out some of that imagery and enhances her music through experimental fashion. While the songstress does admit she sometimes likes to experiment with fashion in her day-to-day life, the outfits shown in her videos and on stage are meant to help tell the story of her music.

In her “Miracles” music video, Kimbra walks through New York's streets in an eccentric, glittery red dress. Matching red combat boots, red lipstick and red nails complete her getup. By walking around in this unique outfit, she means to inject the surreal into everyday life and connect her outfit to a miracle. “The idea of a miracle is something that can be seen quite commonplace, then it seemingly becomes transcendent into something beautiful,” she said.

Kimbra believes she grew a lot more as an artist while recording The Golden Echo. She learned more about producing beats and how to make sounds that change the way the listener feels. But, beyond the technicalities and most importantly, she figured out how to have more faith in herself.

“I think I learned to be more fearless on this album. I didn’t censor myself on things. I went where I felt excited, and I made an album completely from the heart.”

The Golden Voice is now available on iTunes and in select stores. Kimbra will be performing at the Roxy Theatre in Los Angeles on Oct. 23, 2014.