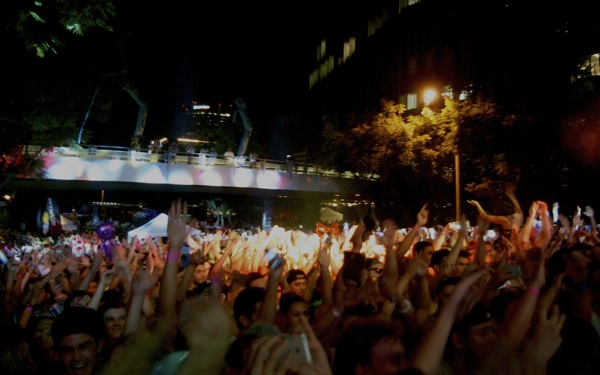 Phewww, that was a hot one! Seriously, the Mad Decent Block Party was DISGUSTING this weekend in downtown Los Angeles. We’re talking heat in the 90s, stuck between tall buildings in the middle of windless downtown and surrounded by hundreds of day-ragers whose body odors were just as serious as their blood toxicity.

All the sweat aside though, Mad Decent’s LA Block Party was exactly what it should have been this weekend: a hot and fun musical sendoff for the summer. It’s a simple show, it’s in town, easy to get to, easy to leave, and there’s only one stage to worry about. Stuck just to the side of downtown on a closed-down private street on a studio lot, the view from the side of the venue was splendid, as DTLA hung over the audience's heads.

If you got there early enough, you probably got to see at least a little bit of Djemba Djemba, which was a good move on your part. Djemba killed it with a real smooth, afternoon trap set. In fact, that’s the cool thing about watching him; his song selection and transitions really do most of the talking. He doesn’t throw hypie (hyphey? Not really a word, I know) build-ups in your face, moving from one drop to another and hoping to keep you engaged as an audience member. Nah, he just throws down and waits for the music to catch hold.

DJs like Cashmere Cat and Trippy Turtle (who shared a set after Djemba Djemba), however, rely heavily on redundant on-beat build-ups to structure their performances. These two DJs look like they’re about 12 years old, with their baby faces and high school attire. They also share the same level of musical maturity as a high schooler, so I guess that makes sense.

Although these two generally suck live (both individually and together) because their style is redundant and unintelligent, I found myself unwilling enjoying their set on Saturday. As much as I expected it to be terrible, Cashmere Cat and Trippy Turtle’s b2b set was actually pretty good. The song selection was upbeat with a few threads of soul and R&B, and their stage presence was confident and casual as the two joked in between songs. Their set was just fun and unassuming, and helped pass the time on a hot afternoon.

Reminding us why we were listening to them in the first place, STRFKR were the only performers with actual instruments. Their set was a nice break for fans, who had their ears assaulted by DJ's all afternoon. STRFKR's set-up and breakdown provided a hole in the set list too, which gave everyone a chance to grab a drink and cool off. Dressed in bright colors and poised to mellow, STRFKR gave hardly an introduction or any sort of crowd pandering before skipping into their bouncy selection of songs that you probably hadn’t listened to since 2008.

TJR was left to pick up the slack when everyone felt calmed and satiated after STRFKR’s 30-minute electro-pop love fest. An intense pick-me-up of house music and good, old-fashioned stage presence, TJR soaked up the last of the day’s light and prepped everyone for Block Party’s nighttime headliners.

Laidback Luke was another name in Saturday’s lineup that seemed like a blast from the past. But no matter your opinion on the guy, he threw down possibly the best set of the night. Both energetic and calculated, his song selection flowed well, and his overall performance was just generally affective. You got reminded of two things when watching his well-composed set of Vegas-esque club techno: Laidback Luck is really good, and the night still isn't over...we still have Diplo and Skrillex.

Watching Diplo do a set nowadays is like watching an expert ringleader conduct a circus. He’s more of an MC than he is a DJ, even though he still spins like he always has. Musically, Diplo has the freedom to mess around with whatever genre is currently popular. His sounds on Saturday included his standard mumba/reggaeton-inspired house, but then there was also a lot of trap and even some pop. It’s odd, actually; I think he’s the only person out there who can spin Top 40 tracks in front of an EDM audience and still maintain his street cred.

And I guess it says a lot that no one really reacted all that surprised when Skrillex came out and played half the set with Diplo. Both of these guys show up everywhere, and I suppose in a place like L.A., it’s real convenient for one or the other to help out at each other’s shows.

Skrillex, whose reputation has been resuscitated in the past year or so, was the icing on the cake to a long, hot day of good techno music. Mixing in brand new remixes with recent trap and even a few of his more original breakstep songs, he added a lot to Diplo’s set and Block Party’s overall impact. He and Diplo stopped frequently to make announcements and introduce new tracks, but they kept the audience involved, making sure no one left until the show was over.

It was a fun one in DTLA on Saturday. If you were there, I sincerely hope you’ve taken a shower since then.