USC’s Kessler Wants to Raise His Play, as Well as the Team 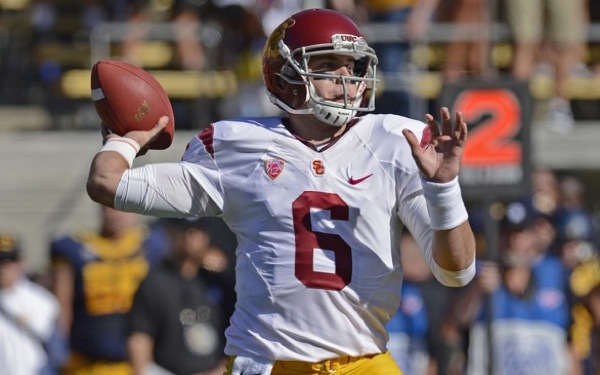 LOS ANGELES—USC quarterback Cody Kessler has not committed a major error this season.

No passes have been intercepted. He has not fumbled.

But Kessler sees room for personal improvement in the aftermath of the Trojans’ upset loss at Boston College, which dropped the Trojans’ record to 2-1.

“I missed some plays last game; I missed some throws I should have made,” he said after Tuesday’s practice, adding, “You can always elevate your game to the next level.”

With an open date Saturday, Kessler and the Trojans are attempting to regroup during bye-week practices. The Trojans play Oregon State on Sept. 27.

Kessler has completed 71 percent of his passes, eight for touchdowns. He is one of only four quarterbacks in major college football who have thrown 100 or more passes without an interception.

Coach Steve Sarkisian indicated after the Boston College game, in which the Trojans rushed for 20 yards, that he needed to be more open as a play-caller, to use the pass to set up the run.

Each game is different, Kessler said. “I could throw the ball five times or 60 times — I just want to win,” he said. “It wasn’t necessarily that we didn’t throw the ball enough last game.

“The run calls were there. We were getting into the right position and we had the looks we wanted. We were just missing some stuff.”

“They’re having a tough job as it is with guys coming at them, and I need to help them out and get the ball out quicker.”

“It was all of us, not just Cody,” Wheeler said. “Our communication could be better so we need to step up and improve.”

“Unfortunately, it couldn’t contribute to a win,” he said Tuesday.

Farmer had not been in the end zone since his senior season at Gardena Serra High in 2010.

Former coach Lane Kiffin played him at running back as a freshman and he was a seldom-used receiver as a sophomore. He suffered a major knee injury during spring practice in 2013 and redshirted last season.

Farmer’s first-quarter touchdown gave the Trojans an early lead. But it took a few moments for him to recognize the personal significance.

“It didn’t really sink in until I got to the sideline,” he said.

Farmer has nine receptions for 72 yards.

The Washington game will be played Thursday night, Oct.8.

The Trojans’ road games are at Arizona State, California, Colorado and Oregon. The Colorado game is on Friday night, Nov. 13.

Senior D.J. Morgan, who struggled with knee issues before and throughout his USC career, has left the football program so he can prepare to be fully healthy for track season and pursue professional football next year. Morgan rushed for 364 yards and a touchdown in 83 carries as a tailback. He had switched to safety during training camp.