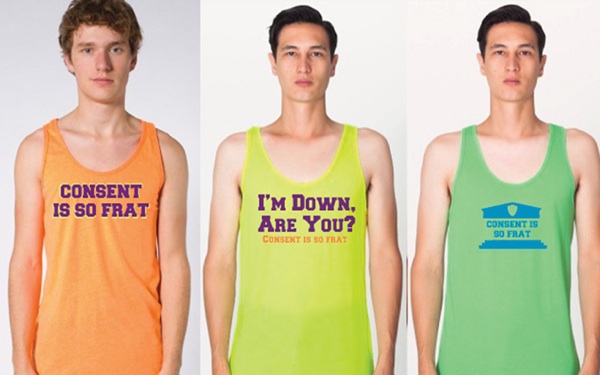 Project "Not Asking for It" was started by a female Wesleyan University student who wanted to spread the message that a woman's clothing does not mean sexual consent.

Now, a former Wesleyan male student is getting college guys and fraternities to stand up against campus sexual assault too.

Matthew Leibowitz rushed the university's Alpha Epsilon Pi fraternity and graduated in 2014. He then founded "Consent is So Frat" to promote consent in greek organizations, reports The Daily Targum (Rutger's university paper).

“The idea here is to focus on how consent can be a fraternal value,” Leibowitz told Rutger's paper.

He also told USA Today, "We want to promote the idea that consent is cool for a fraternity brother.”

On its website, CISF describes its mission as a "a movement of fraternity brothers believing that consent and healthy relationships should be part of what it means to be frat. Whether throwing ragers, running philanthropy events or just chilling with our brothers, we should be able to treat the men and women on our campuses with respect."

Currently, CISF has passed out flyers to spread the word about the organization's goals, and people can order T-shirts with CISF's logo printed on front. The organization will also launch photo campaigns and campus events to raise awareness.

The movement has expanded to more than 30 U.S. campuses thus far.