The Maze Runner Gets Lost in Overfamiliarity 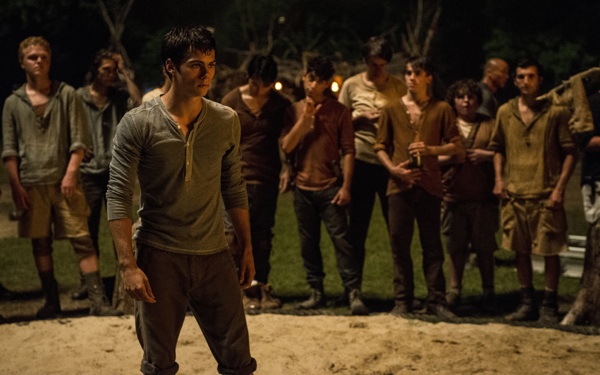 With the help of fellow residents of the Glade, Thomas (Dylan O´Brien) devises an escape plan.
(Credit: Ben Rothstein TM and © 2014 Twentieth Century)

This month’s “young adults save the future” film franchise is The Maze Runner, an indifferent quest tale about boys trapped in a gigantic maze with no idea how they got there.

A teen boy (Dylan O’Brien) wakes up, screaming, on a freight elevator soaring up to a field, where it promptly drops its “greenie” or newby into a clatch of rustic boys his own age. He doesn’t know his name or anything else other than the English language. But the other lads set him straight.

This is “Glades,” the glade. Some boys are “Builders,” some are “Runners.” They run through the vast walled maze that surrounds their encampment each day, coming home just before the huge walls creak shut on gigantic gears each night.

They’re careful to avoid “The Grievers,” supersized spiders with metallic legs, guardians of The Maze. Because Grievers sting, and their sting causes “The Change” — a poisonous delirium.

There are rules that have kept them alive under the counsel of Alby (Aml Ameen) and the bully Gally (Will Poulter). But the new guy, who recovers his name — Thomas — is impatient. He wants to find a way out. Now. He upsets the balance, breaks the rules and then “The Girl” (Kaya Scodelario) arrives and tosses things into a further tizzy.

Are they doomed to a slow death by isolation, or will the Grievers get impatient and storm in to wipe them out?

The big walled obstacle course and not-so-itsy-bitsy spiders keep one from confusing James Dasher’s The Maze Runner with last month’s The Giver or last spring’s Divergent or this fall’s latest Hunger Games. Plainly, these authors all picked up the same copy of Joseph Campbell’s The Hero With a Thousand Faces or Vladimir Propp’s The Morphology of the Folk Tale.

That’s what the grumpy teen walking out of the theater ahead of me meant when she griped “Why do these things all look alike, and always need sequels?” Yeah, they’re all alike, just alike — simple quest tales with little wrinkles too make you think maybe THIS time things will be different.

The actors aren’t bad, with Nanny McPhee vet Thomas Brodie-Sangster standing out by being as skinny as a teen stuck in the woods, forced to fend for himself, and O’Brien, Ameen, Poulter and Ki Hong Lee (as a “Runner”) having decent screen presence.

Art director turned director Wes Ball gives us a convincing maze of towering, weathered and moss-covered concrete, and a woodland world where the boys have mastered shelter building and fire starting. The film has fine moments of claustrophobia as the moving walls threaten to squish assorted boys, the spiders are humongous and the lads disagree among themselves, violently, about what to do.

Very Lord of the Flies.

But all these literary underpinnings do not disguise a blasé, emotion-starved script, dialogue that ineptly repeats what the images have already shown us is happening, stagey scenes where characters poke each other in the chest to keep them from storming out of the camera frame.

And the resolution to this puzzle is so botched it’s insulting, as if they’re daring us to laugh at the notion that this is merely “the beginning.” You have to go all the way back to last weekend’s Atlas Shrugged III to find a sci-fi film promise that cringe-worthy.

Directed by Wes Ball, scripted by Noah Oppenheim, Grant Pierce Myers and T.S. Nowlin, based on the James Dashner novel. A Fox release.

MPAA Rating: PG-13 for thematic elements and intense sequences of sci-fi violence and action, including some disturbing images