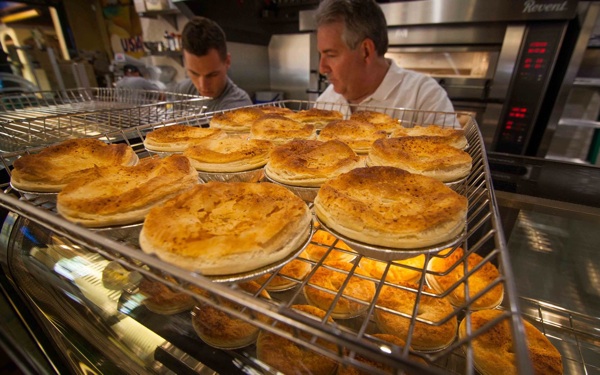 Redeem this coupon for a "buy one, get one free!"

The Aussies are coming, and they aren’t coming empty handed.

The Garlicks from Sydney, Australia have brought us their national decadent treasure—a treasure with a recipe that widely varies from family to family, generation to generation: the meat pie.

Having already made quite a name for itself over in Australia—and even as far as Hong Kong—the wildly popular Garlo’s Aussie Pie Shop chain has now reached the U.S. for the first time, and Los Angeles is lucky enough to claim its first location in Westwood.

When we hear “meat pie,” most of us Americans, or maybe just me, automatically think of Sweeney Todd and Ms. Lovett’s famous pies that consist of somewhat undesirable ingredients. However, brothers Nathan and Sean (and their father Terry) pride themselves on bringing something wholesome yet lean to their meat pies, which tie back into Australian traditions.

“Meat pie is, first and foremost, considered the national dish of Australia,” said Sean, who is the shop’s managing director. “If there’s anything that Australians can put their hands up and say they own it’s the meat pie.”

But don’t expect this pie shop to be bombarded with cliché imagery of koalas and kangaroos. Instead, look for Australian culture trumping Australian theme. The music, coffee and ingredients are all indicative of the brand’s Australian identity.

However, the tricky part is that meat pies aren’t only found in Australia. England, New Zealand, South Africa, and many other countries boast their own recipes for the dish. So, what makes Australia’s take so special?

“The way we differentiate our pies in Australia from all the rest is the quality of ingredients, and we pride ourselves on being thin on pastry and big on meat, which is what a lot of Aussies welcome, given the trend towards healthy eating and low fat options,” explained Sean. “By keeping the meat fillings lean and keeping the pastry thin, then it really brings down the fat content and all the things we’re looking to avoid.”

And it looks like customers, quite literally, are eating it all up. Since their first store opened in 2001, Garlo’s has expanded its sales platform to major supermarkets all over Australia and exporting its products to far off lands, like United Arab Emirates. The pies have even infiltrated the food trays of major airlines, with Garlo’s producing up to 25,000 pies a day.

Now, we Angelenos get to look no further than Westwood to get our fill of these savory pastry treats, and Sean and the gang are thrilled about the opportunity.

“Our whole family has had a love affair with America for years,” said Sean, “and it’s always been a dream of ours to bring our concept to America, because we can’t understand that, given that our cultures are so similar in almost every other way, the pie just hasn’t really found its way over here. We think it’s perfect for the lifestyle of Americans to embrace. It’s portable and handheld—it appeals to Americans just as it does to Aussies.”

With their sights first set on Santa Monica’s more notorious streets, where tourists from all over the world gather to spend their money, Westwood was hardly even a blip on the family’s radar—but then they went on a quick tour.

“We realized in order for this to be a success we can’t rely on the expats and the visitors for business—we really need the locals to adopt it as a regular product themselves,” Sean admitted after seeing the large number of students and professionals crowding the area.

The family made quite a solid choice. After their grand opening on Sept. 15, they’ve been slammed with eager customers. The excitement for their product has already urged the Garlo’s brand to adopt a new marketing strategy that includes dorm delivery, pie parties and a whole slew of American franchises.

Still, the Garlicks know some Americans may be skeptical about the new guys in town. As Sean explained, “We make 20 or 30 different flavors of pie in Australia, but we deliberately decided to keep this menu rather tight to not confuse everybody, because we don’t want to hit them with everything at once.”

Realizing they need to assimilate somewhat to the new culture, they’ve included items like Fajita Chicken Pie and Mac N’ Cheese Pie to their menu in order to sway anyone who may be on the fence about “Australian cuisine.”

However, because Garlo’s Aussie Pie Shop is growing and evolving so rapidly, we could be looking at a new international cuisine all together.

Redeem this coupon for a "buy one, get one free!"