USC Has Some Things to Work Out During Workouts 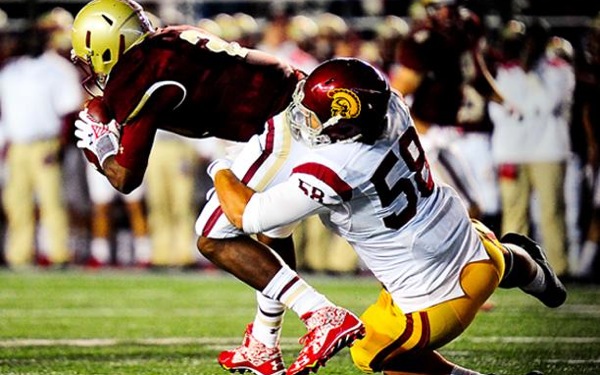 LOS ANGELES—USC spent three practice days attempting to put its collapse against Boston College behind it.

But Coach Steve Sarkisian said the Trojans addressed “quite a bit of our own issues” during the week.

During a scrimmage period Thursday, Greene nimbly scrambled as delighted teammates yelled, “Michael Vick is back!”

Greene is on track to redshirt, but he has made big strides since arriving at USC in January.

“I definitely feel like I’ve progressed,” he said this week. “The coaches have been teaching me a lot.”

The Trojans will be off Friday, Saturday and Sunday.

“I told them to enjoy football this weekend — watch some college football, watch some NFL on Sunday and come refreshed and ready to go Monday morning,” Sarkisian said.

Sarkisian said he was “not naive” to the atmosphere on a college campus on a Thursday night but was hopeful players — “I’ve got 113 sons” — would make wise decisions during their time off.

“I’m going to have my phone on all weekend,” he said. “My goal is not to have that thing ring.”

Rob Bernardi, athletic director at Nicholls State, reportedly received a resignation letter from Coach Charlie Stubbs on Sunday. Bernardi told CoachingSearch.com that he reached out to Orgeron, a Louisiana native who coached linebackers at the school in 1994.

“He respectfully declined because he made a commitment to his wife that he would stay out the entire year and he wanted to honor that commitment,” Bernardi told the website.

Defensive lineman Greg Townsend, who did not play at Stanford and Boston College because of chicken pox, is expected to practice next week, Sarkisian said.... Tailback Tre Madden (toe) did not practice this week and his availability for the Oregon State game will not be determined until next week.