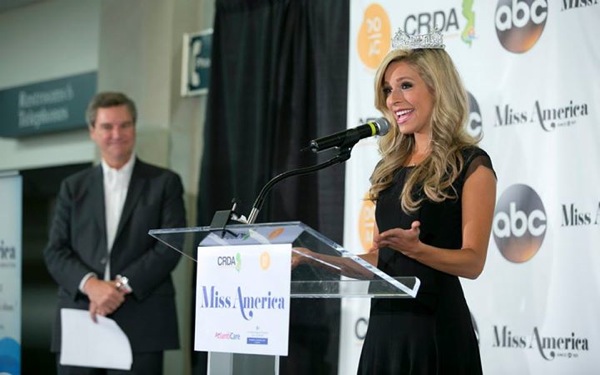 A tipster reportedly told the website Kazantsev was the sorority's Recruitment Committee President for incoming pledges, and she (along with her best friend who was also in the sorority) were harsh towards the pledges. They were called names, berated and "made to perform physical tasks to the point of bruising and exhaustion."

Someone reported Kazantsev and her friend to officials, and a months-long investigation followed. In the end, the two ladies were kicked out of Alpha Phi in 2013, according to a source.

The Miss America organization sent the following statement to Jezebel:

Kira has been fully transparent with the MissAmerica Organization about her termination from the Alpha Phi sorority. It's unfortunate that this incident has been exploited to create a storyline that distracts from what we should be focusing on: Kira's impressive academic achievements at Hofstra University, including earning a triple major from the Honors College and her commitment to serving her community. Kira is an exceptional ambassador for the MissAmerica Organization, and we are excited to be a part of her journey as a force for good across our nation, promoting education and service and working to empower young women.

Kazantsev, who is a California native but moved to the east coast for college, won the Miss America pageant with her platform against domestic violence and supporting victims of abuse (she reportedly dealt with a boyfriend who stalked her and sent her degrading messages during college). Since her win earlier this month, she has been spreading awareness about domestic violence and plans to go on a college tour.

Hopefully, she'll use the tour as an opportunity to raise awareness about hazing in addition to domestic violence, since hazing is considered abuse as well.

Blog
How not to get arrested on campus
1,506 views

Blog
What are shade balls and do how they help save Los Angeles' water?
1,804 views

Blog
Young SoCal couple struck by lightning -- and hand-holding may have saved their lives
1,561 views