John Ridley, Andre 3000 Strike Chord with Jimi: All is By My Side 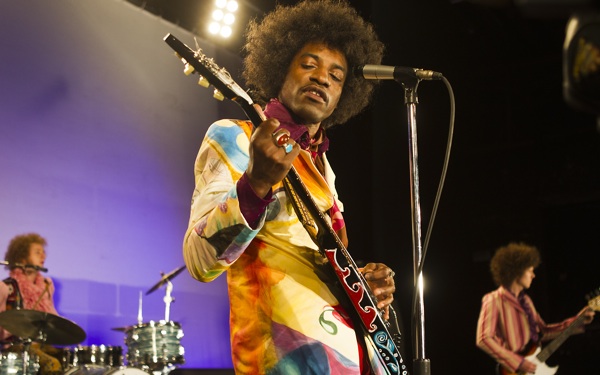 While they accused him of being nothing but a curiosity, Jimi Hendrix simply shrugged, expressing a deep apathy for the formfitting needs of any political, cultural or social association that the ‘60s drove for. While that may have changed in his years of true stardom, Jimi: All is By My Side introduces the groundwork that led to his legend, and whether he liked it or not, the formation of a whole new means of association: the Hendrix guitar.

A man of history and stories, Academy Award-winning writer (for 12 Years a Slave) and now director John Ridley reaffirms his fascination and genius with the past, relaying the life of a most loved rock ‘n’ roller in his most unknown year.

This is no biopic stuffed to the brim with only the super shiny moments condensed to a mere glint; it simply recounts a year in the life of someone trying to make it big and, through both triumphant and blistering dark moments, manages to do just that.

André Benjamin, aka Andre 3000 of Outkast, had been approached many times before to play Jimi Hendrix. But it was Ridley’s script and approach that perked his ear. Instead of trying to grasp the magnitude of Hendrix’s career, Ridley’s script merely hints and titillates about how it all came about.

Through a multitude of women, spanning from Keith Richards’ girlfriend (Imogen Poots, Need for Speed) who takes on the role of unofficial manager, to his hopelessly dependent girlfriend Kathy (Hayley Atwell, Captain America), we trace the route Hendrix took through the grit and melancholy of infatuation to get to the top. It may be easy to overlook the wrongs that icons made years ago, but Ridley is not one to forget that even heroes like Hendrix were villainous in certain moments.

Immediately, Ridley’s direction aims for style over simple narrative. Unlike his historic tendencies, which aim to retell the past with effective and straightforward storytelling as in 12 Years a Slave, the director personifies Hendrix’s guitar riffs in his editing with unpredictable style and fluidity.

The sound editing is anything but commercial. From interspersing conversations from the past to overlapping conservations in the background onto the foreground, it becomes apparent that Hendrix’s world and career relied on far more than just his own gift and gravitas. Those people mumbling in the background and that seemingly insignificant conversation with a stranger that happened weeks ago all tie into his ultimate success.

And if it’s the success that you want to see, an essential music video of Hendrix’s best hits, then you may want to look elsewhere. Instead, Jimi is dusted with the briefest moments of recognizable Hendrix. When he touches a guitar, we hear the faint first strums of “Purple Haze,” and it almost becomes a drug, much like it did with Hendrix. Stringing this theme along, we almost crave the moments of recognizable gusto, and when they happen, the film bursts with the liveliness. But mostly, we hear Hendrix’s covers of other bands (some of them unknown) that he used to get attention, similar to what many musicians do today.

We may only have witnessed André playing a couple of mediocre film roles here and there (Idlewild, Semi-Pro), but Ridley’s history was worth a little more effort. He plays early Hendrix as a charming and smart, yet overwhelmingly awkward and timid, young man, unsure of what both his fans and bosses demand of him. Occasionally, André’s flare may not be entirely Hendrix, but it ties in how stardom can determine power.

Despite his starring role, however, André isn’t the one who we start to miss when the credits suddenly begin. It’s the man who recreates history, who encapsulates it with a style and an elegance that doesn’t boast gratuitous flare. With great genius like that, Ridley’s first feature will certainly not be his last.