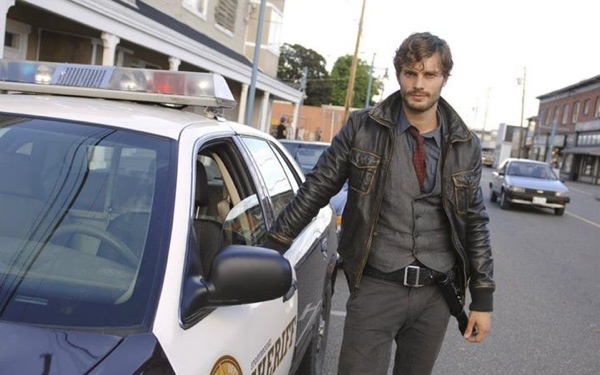 EW reports our beloved Sheriff Graham aka the Huntsman (Jamie Dornan) ALMOST returned to ABC's hit fairytale show "Once Upon a Time" last season during the finale. But unfortunately, the hunk was too busy playing the hot and sexy Christian Grey in the upcoming 50 Shades of Grey movie to return to the show.

Executive producers Adam Horowitz and Edward Kitsis told EW Emma would've seen Graham as a guard while she was locked in the Evil Queen's castle. "She would’ve seen him, and it would’ve been heartbreaking for her because she would’ve wanted to reach out to him, but knowing that—because she’s on a mission—she couldn’t," explained Horowitz. "It wasn’t a big plot thing, but it was an emotional moment that we wanted to do.”

If you recall, Dornan's character died way too soon during the first season after the Evil Queen crushed his heart, along with the hearts of women everywhere who couldn't get enough of this sizzling Christian Grey-in-the-making.

Sadly, we'll have to wait until February 2015 when 50 Shades releases to get another dose of Dornan.