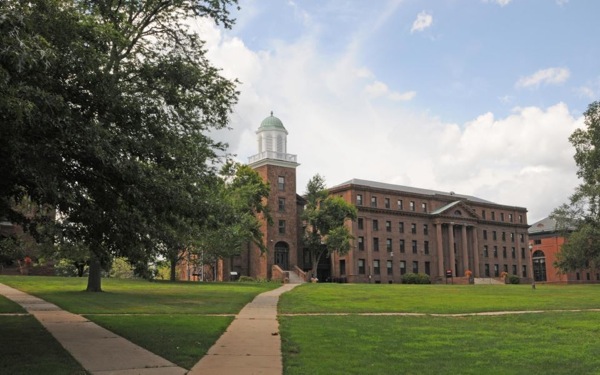 HARTFORD, Conn. — Wesleyan President Michael Roth has announced that the university’s residential fraternities must admit women and become “fully coeducational” over the next three years.

The decision comes after two high-profile lawsuits alleging rape in fraternity houses and after the Wesleyan University student government called on the administration last spring to force fraternities to go coed or give up their houses.

Kate Carlisle, spokeswoman for Wesleyan, said, “This is a change that Wesleyan has been thinking about for years,” and is not directly linked to any particular incidents.

“The move to coeducation is really all about inclusion,” Carlisle said. “It’s all about equity and very much in keeping with Wesleyan’s tradition of equity and progressive leadership on gender equity and issues like this.”

In their email, Roth and Boger said they “recognize that residential fraternities have contributed greatly to Wesleyan over a long period of time, but we also believe they must change to continue to benefit their members and the larger campus community.”

“If the organizations are to continue to be recognized as offering housing and social spaces for Wesleyan students,” the email continued, “women as well as men must be full members and well-represented in the body and leadership of the organization.”

Carlisle said the university, which is in Middletown, Conn., will work closely with the residential fraternities to ensure that the transition is as smooth as possible. She said it wasn’t clear how soon the fraternities would be asked to begin admitting women as part of the three-year transition.

Carlisle said the administration also has several new policies that will be implemented immediately to make the fraternities safer. These include increased university oversight of the fraternities, more education about safety-related issues, and the elimination of rush or pledging for freshmen.

Representatives of the university’s two residential fraternities now in operation — Delta Kappa Epsilon and Psi Upsilon — could not be reached immediately Monday. However, T.J. Blackburn, a member of DKE, said last spring that if the fraternity went coed, it would lose its charter and have to be shut down. Blackburn, who was also president of Wesleyan’s Inter-Greek Council last spring, said that the national organization for DKE doesn’t recognize coed groups.

“Coeducation is essentially a death penalty,” Blackburn said at the time.

Fewer than 100 students live at the university’s residential fraternities. Earlier this month, Wesleyan declared a third residential fraternity, Beta Theta Pi, off-limits to all students, when a student was seriously injured when she fell from a third-floor window. Carlisle said that student is in stable condition at St. Francis Hospital and Medical Center.

At the time of the fall, Roth said in an email that he had “lost confidence in the ability of the fraternity members to manage social and residential activities at the house and abide by university policies.”

The university has said that Beta will remain off-limits to students for at least the rest of the academic year, but the school is open to considering a plan from the fraternity on how it would operate to meet expectations for student residential life.

Wesleyan now has two coeducational residential fraternities: Alpha Delta Phi and Eclectic. It also has two additional fraternities and one sorority without residences.

Last spring, the Wesleyan Student Assembly called on the administration to force the residential fraternities to go coed as an attempt to reduce the incidence of sexual assault on campus and to address the gender inequity of allowing large campus social spaces to be controlled by all-male groups.

Nicole H. Updegrove, who graduated from Wesleyan in May but was president of the Wesleyan Student Assembly last spring, said at the time that she kept hearing stories from women on campus about them feeling “uncomfortable, vulnerable and unsafe in fraternity spaces. From a gender equity standpoint and a safety standpoint, I thought this proposal made a lot of sense.”

Roth said in his email that over the summer he heard many views on the topic from Wesleyan alumni, students and faculty. “Some have urged that we preserve the status quo; others have argued for the elimination of all exclusive social societies,” Roth and Boger wrote in their email.

Wesleyan has had a strained relationship with fraternities over the years. One of the lawsuits, which was settled last year, included an allegation that Beta was known as a “rape factory.” In that case, an anonymous student sued the school after she said she was raped by a nonstudent inside the fraternity house. The man accused of the assault was not a Wesleyan student and went to jail.

In the other high-profile claim, a Wesleyan student said she was raped in the common room of Psi Upsilon fraternity during a party in May 2013. In March, the woman filed a federal lawsuit against Psi U., claiming she was assaulted during a party that was “wildly out of control.” Her assailant was expelled from Wesleyan.

Campus News
‘Adulting’ is hard. UC Berkeley has a class for that
560 views