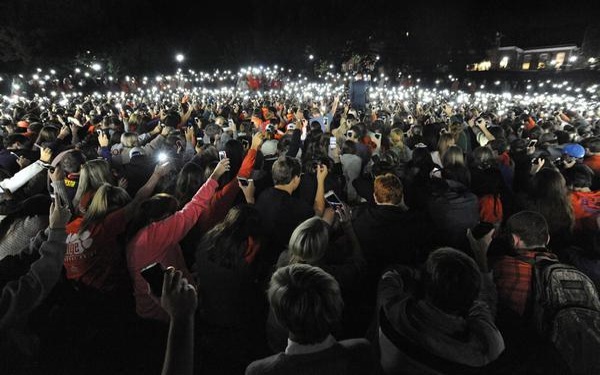 USA Today reports South Carolina's Clemson University has suspended all fraternity activities after a 19-year-old student's body was found in a lake on Monday. The student, Tucker Hipps, likely died from a head injury after falling from a bridge and hitting his head on a rock.

Hipps had reportedly went on a run with Sigma Phi Epsilon fraternity members Monday morning. When he did not return, the fraternity notified officials. They found Hipps two hours later in Lake Hartwell.

According to Greenville Online, a sheriff spokesman said,"From what we have been told, he was running with some of his fraternity brothers and for some reason or another he wasn't able to keep up — he was having some issues. They got to breakfast, and he wasn't there. Apparently they went to check on him and couldn't find him."

There is no evidence of hazing, but the investigation is ongoing.

Student Affairs Vice President Gail DiSabatino reportedly said, "There has been a high number of reports of serious incidents involving fraternity activities, ranging from alcohol-related medical emergencies to sexual misconduct. These behaviors are unacceptable and mandate swift and effective action to protect students. There is no higher priority than the safety and welfare of our students."

The presidents of the 24 fraternities voted to suspend education activities for new members until further notice.