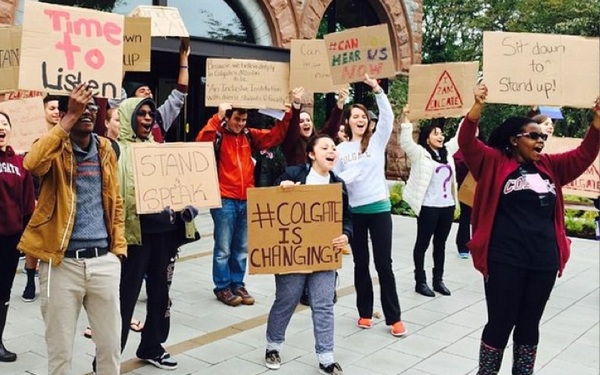 Yik Yak, an app where users post anonymous messages to others nearby, gives people the freedom to write whatever is on their minds without the fear of facing any serious repercussions (unless criminal threats are posted). Unsurprisingly, it has grown popular among college students.

However, Yik Yak is also causing quite a bit of controversy, inciting protests at one college and prompting another school to ban the app all together.

At Colgate University in New York, users' racist posts on Yik Yak have urged more than 300 students to stage a campus sit-in for three days straight, reports Inside Higher Education.

On the app, posts such as "I don't want black kids at this school" and "N*ggers be complaining" paint a larger picture about the lack of diversity at Colgate (white students account for nearly 70 percent of undergrads) and the treatment of minority students.

"In order to obtain a complete liberal arts education, one must learn and be aware of different identity politics. Colgate University, at this moment, has insufficient methods to address equity and inclusivity," said the Colgate University Association of Critical Collegians (ACC), the group that has been leading the demonstration.

"Acts of racism and homophobia have no place at Colgate and will not be tolerated. Prejudice can devastate our community..." he said.

The Huffington Post reports the ACC has published a plan to help administrators make the university more inclusive. The group plans to stage its sit-in until the "action plans are met."

Over at Norwich University in Vermont, reports of cyber bullying have prompted the university to block Yik Yak. On Saturday, it became impossible for students to access the app through the school's computer system.

However, some argue that blocking Yik Yak is limiting free speech and is an unproductive way to prevent cyber bullying and racist remarks.

An editorial that appeared in Syracuse University's paper The Daily Orange points out that cyber bullying and racist remarks have "existed long before Yik Yak and it still exists outside of the app. Yik Yak is not the source of offensive speech, it's merely a platform for it." Thus, the article states, colleges and universities should focus their efforts on the students by figuring out the motivation behind offensive speech.

In a separate editorial in The Daily Cardinal, at the University of Wisconsin-Madison, the writer shines a light on Yik Yak's benefits and positives:

"The app is a great system for students to share their thoughts and stories without fear of being cyber bullied in response. Responsible users ensure that the feed stays fresh with interesting yaks, rather than inappropriate lies. For these reasons I encourage students to 'yak it up' as long as it is here."

Still, it's hard to ignore Yik Yak's anonymous posting feature that has allowed college students to target and bash other students. For example, USC's Neon Tommy posted an article about eating disorders among college females ("Eating Disorders: A Growing Problem on College Campuses") and described Yik Yak and other similar platforms as sites that encourage "users to anonymously rank and judge fraternity men and sorority women based on their looks, pitting each organization against the other."

"Glancing through the comment sections of these websites, it's very clear that these commenters are judging hundreds of women on how thin their legs are, or how good they look in their dresses," reads the article.

In light of the Colgate sit-in and Norwich's ban, it will be interesting to see if other colleges will receive any flack thanks to Yik Yak.