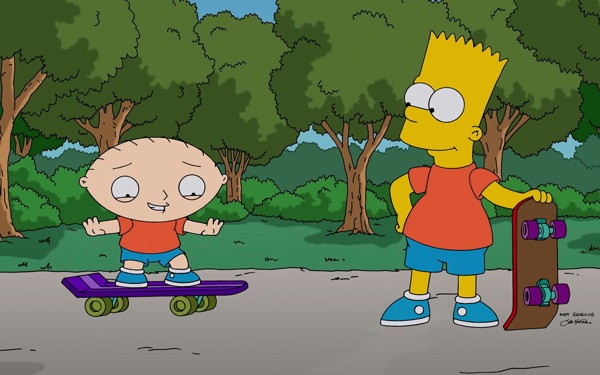 The answer to the question posed in this headline: probably.

Despite the fact that the rape joke Stewie says in the trailer for the "Simpsons" and "Family Guy" crossover episode has caused some controversy, it's doubtful that the creators will remove the joke from the actual episode.

In the scene, Bart is trying to teach Stewie how to prank call someone. When Stewie grabs the phone, he shouts into the mouthpiece, "Hello, Moe? Your sister's being raped!"

"I was blown out of my shoes when I saw the scene with the rape joke in it. It really troubled me," Tim Winter, president of the advocacy group Parents Television Council, told CBS.

But, Seth MacFarlane reportedly said in an interview with Entertainment Weekly the joke was "pretty funny" in context.

Being that rape incidents and violence against women in general--from college campuses to the NFL--have been grabbing headliens everywhere lately, it's a little surprising the show or network hasn't announced the removal of the joke.

Then again, perhaps the question isn't if they will remove the joke -- it's should they remove it?

A spokeswoman for the Rape, Abuse and Incest National Network reportedly said, "I think the show is making it clear that rape is not funny by how they are positioning the joke. It’s my hope that would be the viewers’ take-away."

The crossover episode will be the season premiere of "Family Guy," airing Sunday, Sept. 28 at 9 p.m. on FOX.

Watch the trailer above!