If USC Loses to Oregon State, is the Steve Sarkisian Honeymoon Over? 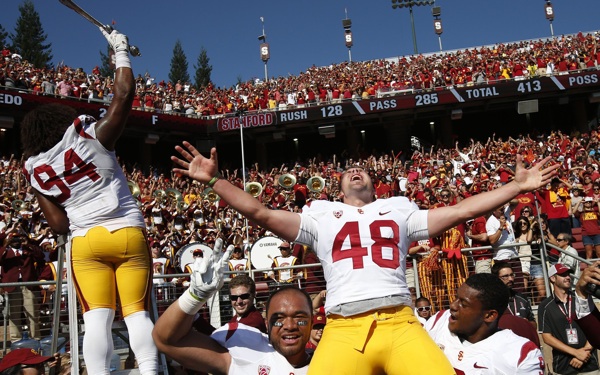 USC tracks what it calls “significant” upsets in its history, which can be a win or loss for the Trojans.

The 37-31 loss to Boston College two weeks ago certainly qualifies. And Saturday’s opponent, Oregon State, might as the Beavers are nine-point underdogs.

This in itself might not seem earth-shattering, but if the Trojans lose to Oregon State, it would be the first time USC suffered back-to-back “significant” upset losses since 1959. USC lost to UCLA and Notre Dame that year and the coach, Don Clark, was replaced by John McKay.

The fact this is even a subject raises a question just three games into the Steve Sarkisian era: Is the honeymoon over?

“We’re three games into this thing,” Sarkisian said Thursday. “This is a process. We knew it was going to be journey.

“It wasn’t going to happen overnight. We’re just in the infancy stages of the development of this program and where we want to take it.”

USC athletic director Pat Haden summed up the start of the season in one sentence: “We have shown some moments of real brilliance, but we laid an egg against Boston College.”

Everything tends to come back to Pete Carroll when discussing USC football. Carroll inherited a much less talented team in 2001 and started 1-4. But no loss was more than five points and each game showed the team’s competitive nature.

USC lost to Boston College by only six points, but the Trojans were steamrolled as the Eagles rushed for 452 yards, making the game seem more lopsided.

It might sound strange, but USC (2-1) already faces a statement game Saturday, where it shows its true identity. The narrow victory over Stanford raised expectations, but the Boston College result brought only discontent.

Oregon State (3-0) is almost a no-win game. The Beavers last defeated USC in Southern California in 1960. So if the Trojans win, they are just doing what is expected. A loss would probably unleash a second wave of discontent.

When McKay succeeded Clark, his first game was that 1960 loss to the Beavers, which meant USC actually suffered three straight significant losses over two seasons.

But Sarkisian said he is not afraid of the pressure from coaching at USC.

“I chose to come to USC to be the best,” he said. “To win championships. Expectations are extremely high. When we don’t perform to our abilities. We need to fix it.”

There are two camps when analyzing USC football. One is that Sarkisian inherited the Lane Kiffin mess and a depleted roster, which means he needs several years to rebuild the program. The other side points to the fact USC went 10-4 with Kiffin and Ed Orgeron last season and returned 18 starters from that team, so success should be demanded.

The pollsters agreed, as USC was ranked No. 15 in the preseason. Hopes increased even more after USC dismantled Fresno State in the season opener.

But the offense sputtered, Sarkisian went conservative and it seemed like freshman stars like wide receivers Juju Smith and Adoree Jackson were underutilized.

“If we can get our young players some opportunities and if we can stay healthy, I expect we will have a good season,” Haden said.

In some ways, it is difficult to assess what constitutes a good season at USC. Winning the Pac-12 South Division? The Pac-12 title? Playing and winning in a major bowl game? What happens if USC does none of that?

Is the roster and some youth enough of an alibi?

“That just happens to be a couple issues right now,” Sarkisian said. “We have to understand our roster. The depth of our roster and some of the youth we have at certain positions. Some of the these guys have only played three college games in their life.”

That is a valid excuse. However, this is also USC. And excuses are never really valid excuses if the Trojans are not winning.