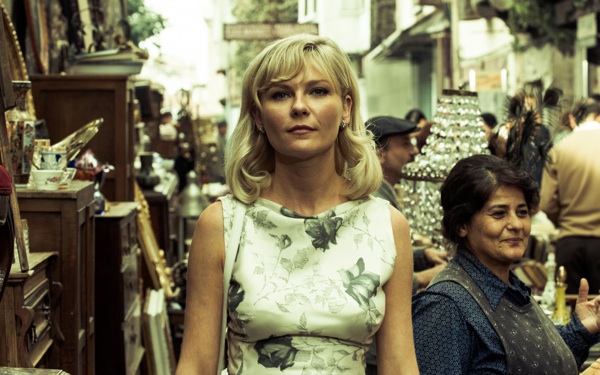 Oh, what a tangled web we weave, when first we practice to deceive. Blackmail. Intrigue. Suspense.  Murder. Twists. The Two Faces of January offers a tantalizing plot full of schemes, ploys, tragedy and love. People also fall and hit their heads in this movie too---a lot.

Screenwriter Hossein Amini (Drive, Snow White and the Huntsman, 47 Ronin) directs the horror in the most pivotal, provocative directorial debut to date. The dark, layered drama starts off slowly but ultimately builds to a satisfactory finale full of psychological thrills. Adapted from the 1964 Patricia Highsmith novel of the same name, the story revolves around three wealthy and affluent, but flawed, American tourists vacationing in Europe.

Chester MacFarland (Viggo Mortensen) and his much younger wife, Colette (Kirsten Dunst), meet ‘vacationing’ tour guide Rydal Keener (Oscar Isaac) while touring the ruins of Athens. Shortly after meeting, they find out that they have much in common with Rydal: he is American and enjoys the finer things life has to offer, and he notably speaks five different remote languages. He is also a suave, attractive con-artist who survives by scamming unsuspecting tourists. However, the couple does not know this initially.

After some small talk, the two decide to hire Rydal as their personal tour guide, and they become fast friends. They continue to tour and eventually party into the evening together with drinks and dinner. This is when Chester realizes that Rydal, closer to Colette in age, is attracted to his wife. But, he does not disclose this knowledge yet.

Once dinner ends, the party share a taxi and agree to meet the next day. When Rydal discovers that Colette has left her bracelet in the seat of the taxi, he immediately heads back to the MacFarlands’ hotel to return it to her. Upon arrival to their floor, Rydal finds Chester dragging a limp body into a nearby suite.

Chester claims that the man is a drunk and asks Rydal to assist him in putting him to bed. Rydal believes Chester and proceeds to help him, but notices a cache of photographs that suggests the comatose gentleman has been spying on the MacFarlands. Chester explains the man is a private investigator hired by former clients due to financial deals gone awry. He goes on to tell Rydal that they had a scuffle, he hit his head, but he will wake up soon. Rydal doesn’t question Chester’s explanations, and agrees to help the McFarlands obtain fake passports to leave Greece under new identities.

In the meantime, Rydal escorts the couple to Crete, where they can lie low until the passports are delivered.

What happens next is---well, get your tissues ready. Murky motivations, bad intent, jealousy, betrayal and fraud lead us to a melancholic graveside denouement, revealing the humanity of truth, honesty, loyalty and redemption.

The best part about The Two Faces of January is that it’s completely unpredictable and undeniably seat-twistingly tantalizing. Amini does a fantastic job with the elements of crime, lust and injustice in rehashing this marvelous literary piece lost in the annals of time. The characters are simplistic but edgy, and the costumes, settings and cinematography are impeccably on point with its 1960s depiction.

It is by far Mortenson’s best performance, and Dunst proves her continued versatility and growth as an actress with the character of Colette. Isaac is fascinating and reminiscent of a young Al Pacino.

There is room for more intensity and less ‘elegance’ within the plot, but The Two Faces of January does exactly what it should do --- leaves us wanting more.

The Two Faces of January is now playing in theaters.