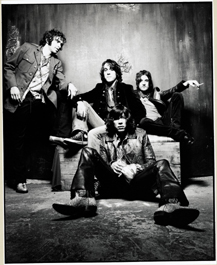 Most of what you’ve read about this band up until now is a lie. That is, if you have read about them at all. Although the high-energy performance and pure old-school rock vibe of the Rock 'N' Roll Soldiers are relatively new to the media, the band has been at this game since 1997 and is ready to set the critics straight.

A major falsity in print about these four friends from Eugene, Ore. is that frontman/guitarist Marty Larson-Xu hates Eugene and is too punk for the town.

"Eugene and the following we established there really helped us see that we could take the band somewhere and do something," explains bassist Evan Seroffsky.

The truth is, the guys love their quiet little town and are grateful they live there and not somewhere over populated with musicians who influence the musical sound in the area.

"We weren’t really exposed to many outside influences so we just created our own weird twisted sound whether it’s good or bad. That’s debatable but at least it was our thing," Larson-Xu says.

After talking to these goofballs you’ll realize it’s not all the media's fault for getting a few things wrong. Sitting in between these life-long buddies/roommates with their vivid imaginations and jokes to boot isn’t easy. Between Seroffsky’s fantastical story telling and the rest of the guys letting the truth slide, measly events turn into magical moments and it’s hard to decipher who’s pulling your chain and who’s being real.

The Playboy mansion would be quite a gig for them but French guitarist Kevin Sciou assures me it’s true. As his first gig with the band, it wasn’t something he’d quickly forget. Kevin Sciou joined the band as a replacement for original guitarist and long-time friend Lucus Gunn.

"He really wanted to do his own band and he just didn’t want to be on the road all the time," explains Larson-Xu.

The band has been doing some major touring for the past two years through rain, snow and sickness and has no plans of letting up anytime soon. That’s just fine with the Soldiers since they say they have no homes to return to anyway.

"We put everything outside of our house and paid some guy $150 to haul it away," says Larson-Xu.

Before they got signed, they graduated high school and moved to Seattle for a while. They all lived in the same house, rehearsed 24/7, played a few gigs and recorded some tracks.

"Living together just gets horrible sometimes. We almost burned our house down once in Seattle but all in all, it was a good move to go to Seattle," jokes Larson-Xu.

Once they returned to Eugene, things started moving into overdrive when they began scoring more shows, gathering a following and finally getting recognized. They even got a spot in a Verizon Wireless ad. They have also been featured on shows like "One Tree Hill" and "Smallville" and on several video games including "MVP Baseball 2005."

Lyrically the band may come off as a bit cocky at first. That is, until you read the actual lyrics. When Larson-Xu sings lyrics like "everybody is our bitch" and "so many musicians to kill" he says it’s all tongue and cheek and should not be taken literally.

"A lot of stuff just comes out of my head; it’s not necessarily about reality," he explains.

Understanding the essence of the band plays a huge role in knowing who the RNR Soldiers really are: total jokers.

"We are a band of friends that have grown up together and it’s more a camaraderie and less about musicianship and more about energy and fun," says Larson-Xu.

With a grueling tour schedule, countless interviews, filming videos and meeting fans, it’s a wonder how they find time to do anything else. One thing is for sure, they can’t wait to get back to the solitude of their hometown.

"It’s so hectic on the road so it’s kinda nice to go back to Eugene where it’s quiet," says Larson-Xu.

The Rock 'N' Roll Soldiers’ So Many Musicians To Kill will be available on April 11. For more information, visit www.rnrsoldiers.com.
Article posted on 3/7/2006
This article has been viewed 3373 times.