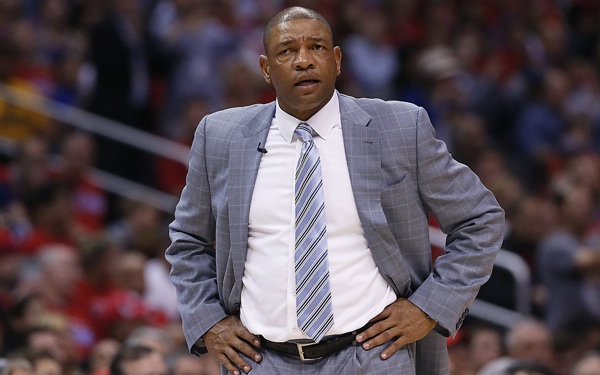 The Clippers will open training camp Tuesday in Las Vegas already ahead of where they were at the same point last year.

For one thing, the team’s core will be entering its second season under Coach Doc Rivers.

“This year we’re putting in stuff they already know as opposed to everything being new,” Rivers said Monday during media day at the Clippers’ Playa Vista practice facility, “so I think that will make our camp better.”

The 14 players with guaranteed contracts include only five newcomers — Spencer Hawes, Jordan Farmar, Chris Douglas-Roberts, Ekpe Udoh and rookie C.J. Wilcox — none of whom will be in the starting lineup.

Rivers recently told The Times that players were so overloaded by new information last year that they were mentally exhausted midway through camp. The Clippers certainly looked overwhelmed in a season-opening loss to the Lakers and struggled to defend for roughly half the season.

The team finished the season leading the NBA in three-point defense but gave up 101 points per game, 14th in the league. Rivers said the next step to improving team defense is to stop opponents in the paint more effectively.

Rivers said he anticipated watching more film in camp than last year. His players may already anticipate what he plans to emphasize on any given play in the footage.

“I think overall our entire team should be better this year because they know me, I know them and our expectations are the same,” Rivers said, “but I think they’re more focused expectations this year, so I’m looking forward to it.”

The Clippers are holding camp in Las Vegas, Rivers said, because the Memphis Grizzlies took their spot in La Jolla from last season. Grizzlies owner Robert Pera is a graduate of nearby UC San Diego.

"I’m sure he gave them a pretty good donation," Rivers said, "so they got the facility."