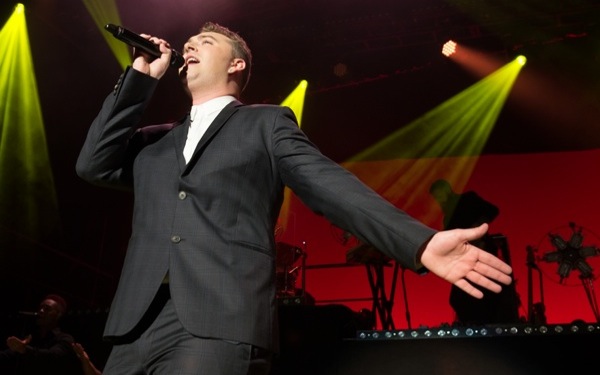 The Greek Theater was packed Monday night with a crowd of celebrities and people of all demographics waiting to see British soul singer and songwriter Sam Smith, who gave an intimate performance that showcased his dazzling vocals and commanding stage presence.

When the lights went down, the screams started, and ladies (and boys) of all ages went absolutely wild. The “selfie generation” was alive and well also, with one girl holding up a sign for Smith that read, “Let’s take a selfie.”

Earlier this year, Smith made his way to L.A. and performed at the Belasco with an impressive but fairly minimal band. This time around, his band was extensive, up on pedestals behind him and looking out over the audience. Three backup singers also accompanied him.

With unusually beautiful vocals that appeal to virtually everyone, the “Stay with Me” singer had a huge smile plastered on his face throughout the night. His voice lives up to the hype 100 percent, and while he seemed almost nervous or giddy at the beginning of the set and in between songs, the second he opened his mouth to sing he radiated confidence and even a bit sexiness. He performed some of the best romance music I’ve heard in a long time, creating the perfect show for any date night.

Although Smith performed his crowd pleasers, it’s safe to say “Leave Your Lover” impacted fans the most; there were some wet eyes among audience members as he crooned, “You'll never know the endless nights, the rhyming of the rain/Or how it feels to fall behind and watch you call his name”—heart wrenching!

A couple songs in, Smith stopped to thank everyone in the audience and said that he had been waiting for so long to play the venue and have a “proper” American tour. For this tour, Smith will continue to travel the U.S. through October in support of his debut album, In This Lonely Hour.