Study: People with a Degree Tend to Earn More Over a Lifetime 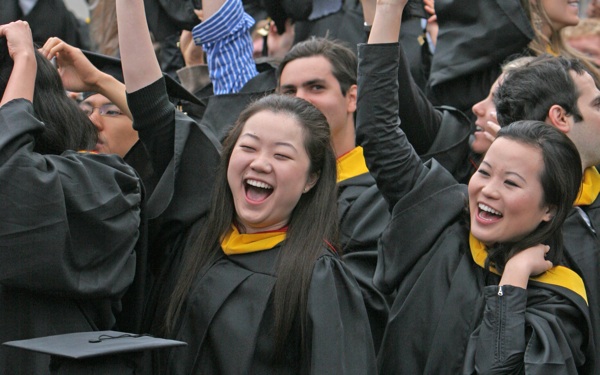 A new study that compares the lifetime value of a high school diploma with associate and bachelor’s degrees – and examines the divergent earnings of 80 different college majors – proves that it pays to go to school and that the field of study can be all-important.

Researchers with the Hamilton Project, an affiliate of the Brookings Institution, examined data from the U.S. Census Bureau’s American Community Survey in reaching the conclusion that, regardless of a student’s major in college, a bachelor’s degree means that the typical graduate will earn considerably more than someone with an associate degree and a lot more than a high school graduate.

The median career earnings for graduates with four-year degrees is $1.19 million – $335,000 more than the holders of two-year degrees and twice as much as those with only a high school diploma.

However, the study also found that the top tenth of high school graduates earn more than the bottom tenth of college graduates, regardless of the college major.

The earnings were gathered from the weak labor market during and after the Great Recession. Earnings profiles include part-time workers and those who may have experienced layoffs. The data were analyzed and the study written by Brad Hershbein and Melissa Kearney of the Hamilton Project.

University of New Mexico Provost Chaouki Abdallah responded to the findings via email, noting that a college degree “is proven to be beneficial to both individuals and to society at large.” However, he said, it is often the case that the rewards of a higher education are not reflected in salary.

“Many of the societal benefits (healthier, more engaged citizens) cannot be measured in the short term nor can they be reduced to financial metrics,” Abdallah said. “The value of an artist or a philosopher may not be in their earning potential but in their impact on humanity. It is, however, absolutely true, based on the data, that college graduates earn more than those with less education.

“The important caveat here is to focus on graduation rather than simply on college attendance,” he said. “Leaving college without earning a degree may actually set someone back financially.”

Depending on a university graduate’s major, the median cumulative lifetime earnings range from just under $800,000 to just more than $2 million, the study found. College majors that involve quantitative skills – engineering, physics, economics, finance, and computer science, operations and logistics – tend to provide the highest earnings.

On the other end of the spectrum, university graduates who work in early childhood education earn the least. The second-lowest paying career is family and consumer sciences, followed by theological and religious vocations. Next on the list are fine and studio arts, social work and elementary education.

Regardless of the level of education, annual earnings tend to level off and even decline after 25 to 35 years. A few majors, notably engineering, crest at about $100,000 annually, while others, such as fine arts, social work and some education fields, barely break $40,000.

In a previous analysis, the Hamilton Project placed the cost of a bachelor’s degree – tuition and fees, room and board, course materials and lost wages while in school – at $102,000.

Because the typical college graduate, regardless of major, can expect to earn at least $200,000 more than a high school graduate, the cost of a college education will eventually pay off.

In conclusion, the study noted that college degrees “may not be a guarantee of higher income, but they come closer than just about any other investment one can make.”

“Importantly, the higher earnings associated with obtaining a bachelor’s degree, even in low-earning fields in the humanities and education, stand up when accounting for the risks of unemployment and underemployment. … Even college graduates who begin their careers in a recession with a relatively low-earning major will still earn more over their lifetimes than individuals with just a high school diploma,” the researchers said.

A top official at Central New Mexico Community College agreed. “This study reinforces the life-long importance of becoming a college graduate,” said Vice President for Academic Affairs Sydney Gunthorpe. “Each level of higher education that a person achieves – whether it’s a certificate or an associate degree at a community college, or a bachelor’s or graduate degree at a university – provides them with greater earnings potential and a much better chance for a desirable quality of life.”