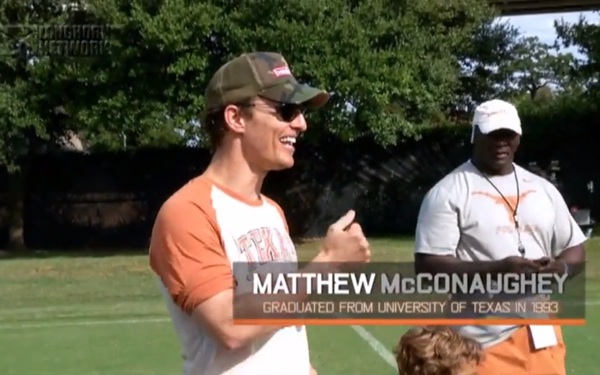 Most coaches are capable of delivering effective pep talks to their football teams. However, we bet most teams would prefer a pep talk from an Oscar award-winning actor, especially if that actor is Matthew McConaughey!

Looking all sporty and so non-Hollywood in his Texas Longhorns gear, the actor spoke to the football team after being introduced by Coach Charlie Strong. In his heavy accent (and with a lot of y'alls), McConaughey basically told the team all about doing your best, busting your butt and pushing yourself to the limit. He said he wouldn't preach to the team, but of course when you're giving an inspirational speech you can't help but make everyone feel as if they're in church.

"I've found that when I've done my best work as an actor," said McConaughey, who graduated from the University of Texas in '93, "it was only when I pushed myself to be better than even I thought I could be. And I gotta pretty high idea of how good I can be; I'm pretty self-confident with how good I can be."

Yeah, Matt. If we all had Oscars we'd be pretty damn self-confident too!

Anyways, hands down the best part of the video is when the players start chanting and pounding their chests with their fists alongside McConaughey, which the actor did with Leonardo DiCaprio in a scene from The Wolf of Wall Street. McConaughey also explained why they did that in the movie:

"I do that before I do a scene, because I'm nervous. I do that to loosen myself up because...I'm thinking too much, and I'm nervous before a scene."

Who wants to bet how many Texas Longhorns will be hitting their chests in the locker room before their game against Baylor on Saturday?