LOOK: Check Out These Photos from Long Beach Comic Con 2014! 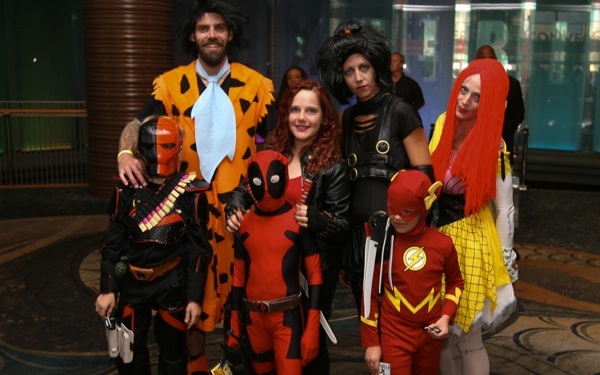 Family cosplay was a theme at this year's event.
(Credit: AJ Grier)

This Comic Con didn't seem to have any major publisher presence on the floor, which was odd. In fact, the biggest booth was for WSS (yes, the huge shoe store).

Despite that seemingly random display, the floor was almost half-artist alley and half-people actually selling comic books, both new and the $1 variety. It was kind of nice to not be overwhelmed with random booths for things that have pretty much nothing to do with comics (WSS aside); it made the convention feel more old school and real. There was even a panel on diversity in comics, which was very interesting and would have probably been impossible to get into at any other con.

Maybe it was because I was only there on Sunday, but I also didn't see many celebrities or signings. It felt more like a nice "hang-out" session for fans and families to enjoy without having to deal with long lines and huge crowds.

What I did see were some cool interactive things for the kids, though, like legos and coloring tables. There was even a little makeshift lazer tag area, and kids had a chance to shoot Stormtroopers with nerf guns (not like cut-outs of Stormtroopers but guys on Stormtrooper armor that would talk back and egg you on).

Not to mention, some of the cute kid cosplays were eye-catching...except for one not-so-cute yet awesome kid that was dressed as the Crow. He (or she) couldn't have been more then 8. And of course, the Silver Surfer kid (see picture) was having the most fun out of everyone; his mom was even dressed as Mystique.

This year, LBCC proved that when families cosplay together, it just makes the whole endeavor that much more fun.