'Everything Will Be Alright in the End' is Weezer’s Strong New Album, and Possibly its New Motto 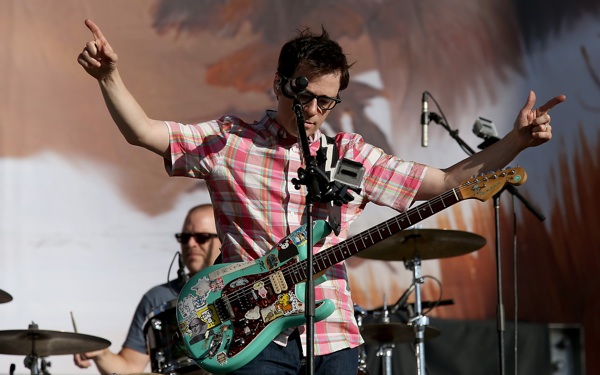 Twenty years ago, Weezer was one of the biggest bands in Los Angeles, a deeply quirky alternative-rock quartet riding high on the success of its self-titled 1994 debut.

Also known as the Blue Album, the triple-platinum Weezer presented a group — and a frontman, Rivers Cuomo — capable of turning anxiety and insecurity into fuzzy power-pop radio hits like “Buddy Holly” and “Undone — the Sweater Song.” The basic idea was Nirvana for nerds, and it worked.

Then Cuomo freaked out, quit the band, came back and made a record that flopped. Then he quit and came back again, which generated more radio hits, before Cuomo aimed for greater heights and eventually alienated his audience with an album nobody liked. Hurley, released on an indie label in 2010, sold 133,000 copies — about 1/30th the number Weezer did.

So when Cuomo and his bandmates performed on a soggy evening this summer at California’s Del Mar Racetrack, the gig might’ve seemed like a stop near the end of the road. Only that’s not at all how it went down: Onstage before a concrete parking lot ringed with corn dog vendors, Weezer — with guitarist Brian Bell, bassist Scott Shriner and drummer Pat Wilson — sounded like a band in top form, rocking a crowd filled with people whose track tickets had gotten them into the concert for free.

“Hello, horses,” Cuomo said between songs. “Hello, humans.” Then he led Weezer through its latest single, “Back to the Shack.” The humans cheered.

One of several out-of-the-way shows the group played this summer, Weezer’s trip to Del Mar was part of the run-up to the release of its strong new album, Everything Will Be Alright in the End, due Oct. 7 from Republic Records. It’s the band’s first since Hurley and comes with comeback-ready talking points, including a return to a major label and a reunion with producer Ric Ocasek of the Cars, who also oversaw the Blue Album.

And then there’s “Back to the Shack,” a stomping guitar jam in which Cuomo sings that he had to “go and make a few mistakes” — an apparent reference to the sleek pop tunes of 2009’s polarizing Raditude, which featured input from Top 40 veterans like Dr. Luke and Lil Wayne. “Kick in the door, more hard-core,” Cuomo goes on, “Rocking out like it’s ‘94.” A statement of intent? Well, maybe.

“I actually have a troubled relationship with that song,” said Cuomo, 44, recently at a park near his home in Santa Monica. “There’s something problematic about the speaker’s position — it’s a little cartoon-ish.” The idea, he went on, was to demonstrate where Weezer was looking on the new record. But in his enthusiasm he might’ve ended up tipping over into caricature.

At least it was his doing. Thanks to his pocket-protector look and songs like the debut album’s “No One Else” — with lyrics that creepily admit to wanting “a girl who will laugh for no one else” — Weezer was initially pegged by many as a product of mid-’90s irony. In reality, Cuomo was as earnest as they came.

“That was quite a shock for me to discover that (perception),” he said. That gulf between his public persona and who he really was eventually overwhelmed any pleasure he took in the group’s success, so in 1995 Cuomo left Weezer and began studying literature at Harvard. When he came back to music, he made a “really gnarly, personal, tell-all album” — the cult favorite “Pinkerton,” from 1996 — that failed to catch fire commercially, driving him away from the band again.

The next time Cuomo returned — for a second self-titled record in 2001, followed relatively quickly by three more albums — he took another tack, deemphasizing his personal troubles and boosting the radio-ready choruses. The hits returned — “Island in the Sun,” “Beverly Hills,” “Pork and Beans,” all staples on alt-rock stations — though some listeners griped that Cuomo was sacrificing the emotional honesty of Weezer’s early work.

That view solidified around Raditude, which had hip-hop-inflected songs like “Can’t Stop Partying” and “I’m Your Daddy.” For “Hurley,” Weezer dialed down much of the supposed excess, but the damage was done. “I think a lot of people wrote that album off without even hearing it,” Cuomo said.

His response (as it so often has been) was to take another break, though not before undertaking the so-called Weezer Cruise, a four-night voyage from Miami to Cozumel, Mexico, that found the group “locked up on a boat with our most die-hard fans,” as Cuomo put it. The experience was a “turning point,” he said, in which he “realized these people really love us, and they want the best for us.”

When Cuomo began writing again, the singer — now a family man with two young children — said the music sprang from a deeper place: thoughtful, multi-layered songs about women, his father (with whom he recently reunited after a long estrangement) and Weezer’s complicated back-and-forth with its following.

Bethany Cosentino of L.A.’s Best Coast, who co-wrote and sings on the new album’s “Go Away,” remembered turning up for her first studio session with Cuomo and meeting someone far more focused and relaxed than the tortured soul he’s often been depicted as. “He was basically the nicest guy ever,” Cosentino said.

In Santa Monica too, the singer spoke calmly and thoughtfully as he sat on a park bench, rolling a Frisbee between his hands.

Yet Cuomo isn’t forsaking pop ambition. Over the last six months, Weezer has posted more than 20 behind-the-scenes videos on YouTube, part of what Frank Arigo, senior vice president of marketing at Republic, called a concerted effort to reach more people. And despite its mixed message, “Back to the Shack” has gotten the band back on the radio; Weezer even played alongside Taylor Swift and One Direction at the recent iHeartRadio Music Festival in Las Vegas.

Asked if he keeps up with what’s on the charts as closely as he used to — if he’s monitoring the competition, in other words — Cuomo admitted he hasn’t been paying a lot of attention. But he’s not worried.

“We’re going to stick by this album and support it and do everything we can to share it with the world,” he said. “I think it has a good shot at being heard — and understood.”