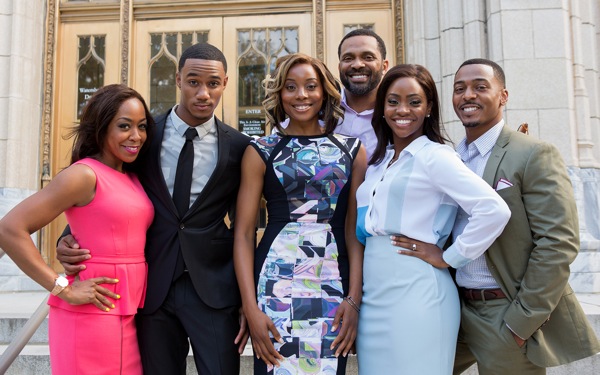 In a surprising move that maybe actually isn’t all that surprising, LeBron James has now graced us with a television series.

James acts as executive producer of “Survivor’s Remorse”—a raunchy yet thoughtfully provocative STARZ comedy series—and risks being associated with the show’s controversial nature. But then again, with all of the drama surrounding professional sports lately, James may be smarter than we think.

The show follows the burgeoning career of the young and superbly gifted basketball player Cam Callaway (Jessie Usher, When the Game Stands Tall) as he copes with the growing pains of living in Boston’s roughest African American neighborhood and then cracking a huge contract deal with an (unnamed) Atlanta team. With his gaggle of outspoken family members at his side, all of whom are almost more eager than him to reap the rewards of his contract, Cam juggles the guilt and the pride of making it big after a lifetime of struggle.

Don’t let the somewhat melodramatic plot summary fool you—“Survivor’s Remorse” is all about the big laughs. First-time showrunner Mike O’Malley (“Yes Dear,” “Glee”) is one of the few white people involved with the series, but he makes sure to put a comedic spin on every political and socially controversial topic he spits at you (and there are a lot of them). From a dying boy with one unexpectedly inappropriate last wish, to Cam speaking for LGBT rights in church, O’Malley uses quick wit, raunchiness and a healthy dose of expletives to make these moments stand out amongst the mundane drone of preaching newscasters and political leaders.

Without a doubt, the casting of Cam’s family set the mood for the rest of the series. With his best friend/cousin/manager Reggie (RonReaco Lee, “Sister, Sister”) and his unabashedly tenacious single mother (Tichina Arnold, “Martin”), battling personalities constantly surround Cam. All of family life’s simultaneously endearing and dizzying qualities are bunched up in Cam’s Atlanta penthouse suite, where they struggle to identify themselves in this newly plush lifestyle.

It’s hard to ignore the political satire O’Malley alludes to via the Atlanta setting. For example, Confederate flags are still proudly and nonchalantly paraded on vanity plates, and the stiff, white, “country club” culture saturates the city’s Southern lifestyle. O’Malley expertly embraced his locale as its own character to create a more polemical and meaningful background to the often silly goings on within Cam’s family.

Furthermore, O’Malley is certainly aiming to give a new voice to African American TV characters, avoiding stereotypes, embracing current affairs’ controversies and targeting matters worth an opinion rather than skating around them.

Whether or not we are looking at an elaborately exaggerated version of James’ life is beside the point. Still, many people will likely obsess over comparing the details—especially the scandalous ones—and won’t be able to look at the show’s other facets. And it’s a shame for them because they’ll miss a lot of important laughs.