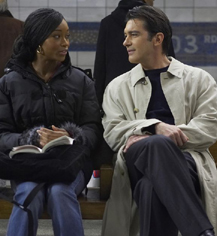 Reel Talk with Stephen Farber - which is now based at the Wadsworth Theater in Angeles - continues its spring season on Monday, March 13 with a special screening of Take the Lead, which releases in theaters April 7.

Directed by Liz Friedlander (who has helmed music videos for groups including Blink 182 and Simple Plan), Take the Lead stars Spanish hunk Antonio Banderas as Pierre Dulaine, a former ballroom dancer who voluntarily takes a teaching post in a New York inner-city school. Much like Sister Act II, in which Whoopi Goldberg takes a bunch of hesitant, rap-loving students and turns them into a gospel choir, Banderas takes a group of kids rooted in hip-hop dance moves and teaches them some ballroom magic.

The film - which is based on a true story - also stars Rob Brown (Finding Forrester) and Alfre Woodard ("Desperate Housewives").

Following the March 13 screening (which begins promptly at 7 p.m.), Farber - the film critic for Movieline’s Hollywood Life and frequent contributor to both the Los Angeles Times and New York Times - will host a special Q&A session with director Friedlander.