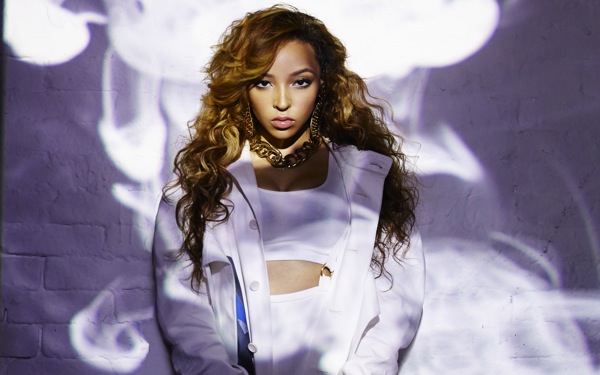 The countdown is on for the Tuesday (Oct. 7)  release of the long awaited Aquarius. It will be new jack actor/R&B singer Tinashe Kachingwe’s official debut distributed by Sony/RCA records. The album hits hard, featuring the "who’s who" of 2014′s top producers such as Stargate, DJ Mustard, Dev Hynes, Mike Will Made It, Detail, Clams Casino, Boi-1da and DJ Dahi.

Summer sizzler and lead single “2 On” gave us a sneak peek of the sultry singer’s abilities and pretty much managed to overshadow the efforts of fellow newcomers Jhené Aiko, Mila J and the like.  Refreshing at best, Tinashe’s sound is a perfect blend of 1980s Janet Jackson and 1990s Aaliyah with a dash of her own futuristic soul. This may be the perfect recipe for the newcomer to win big in 2015 and beyond.

Aquarius’ introduction begins soft and light as the L.A. singer welcomes you into her world. Each record is pure R&B for the ages -- something that hasn’t been done in a long time due to the demands of the new pop and trip hop generations. Interludes such as "The Calm" and "Indigo Child" allow us to flash back to times of originality and creativity. Rapper Future  hits hard on the collaboration "How Many Times," a delicate sampling of Jackson’s "Funny How Time Flies" (1986).  By the time the banger "All Hands On Deck" arrives, you realize that this is not the ordinary 21-year-old pop tart album full of mood swings and catch tunes.

"Bet," featuring British singer, composer, songwriter and producer Dev Hynes, is an excellent show of vocal range and potential, while "Feels Like Vegas" is a great production from Stargate that brings about fantasy of an atmospheric evening in Sin City and the carnal close at hand. "Pretend, which features A$AP Rocky is a slow-tempo party jam and the only pop-sounding record of the work; however, it is the perfect shake up for the entirely rhythmic album.

The major banger on Aquarius may very well be "2 On," a DJ Mustard hit that features new school rapper/artist Schoolboy Q...but we knew that already. "Thug Cry" is an ultimate Mike Will Made It production and will be an instant party favor as well as "Bated Breath," which is good for a turn down. Concluding the album is "Wildfire," a hidden gem of heart and lust, and very reminiscent to Aaliyah’s "Read Between The Lines."

Essentially, Tinashe soars above the class of 2014 with her debut of Aquarius (which is very reminiscent to Aaliyah’s Read Between The Lines). There has been much growth since her home studio days where she produced In Case We Die (2012) and Reverie (2012).  Her 2013 mixtape release of Black Water eventually prepared us for her debut.

“This pressure ain’t for everyone,” she sings on the sexy, culminating "Cold Sweat."

If that pressure is bringing back the true form of rhythm and blues infused with modern indie, alternative and urban pop influences to produce an intelligent, futuristic much-needed sound for today, there’s no doubt that this girl will thrive under it.

Tinashe definitely hit the mark with this one --- and we wait for more to come from this breath of fresh  air.