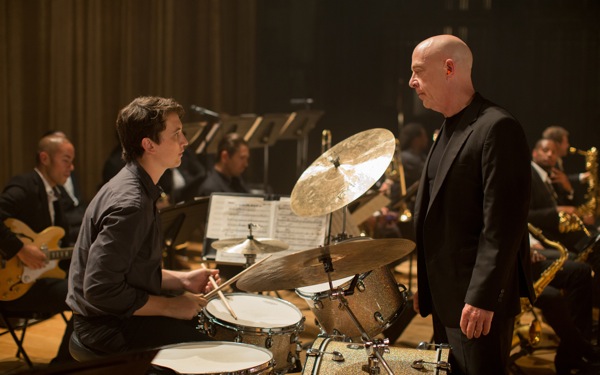 As the blood drips off his blistered fingers and onto the sweat-crusted floor, Andrew thinks—no believes—it’s the end. Wiping the sweat from his brow won’t relieve the pressure he feels from the man staring at him with eyes so livid it seems there’s no escaping their scrutiny. No, this isn’t a horror story about a man about to be killed by a psychopath; it’s a story about a jazz drummer who is terrified of disappointing his teacher.

Raising hell at this year’s Sundance Film Festival, director Damien Chazelle (The Last Exorcism Part II) left with both the Grand Jury Prize and the Audience Award tucked in his back pocket. It may have been a familiar feeling since the short film of the same name won the Short Film Jury Prize a year prior, but as far as his stars Miles Teller and J.K. Simmons are concerned, this is the Whiplash that was always meant to be.

Loosely inspired by Chazelle’s own experience at a music conservatory with a fear-inducing teacher, we are introduced to Andrew (Teller, The Spectacular Now), a timid college boy with an indelible passion for drumming. He thinks all of his years of hard work and little-to-no social life has paid off when the school’s notoriously ruthless yet brilliant conductor Fletcher (J.K. Simmons, Spider-Man) recruits him to be a part of one of the best jazz ensembles in the country—that is, until Fletcher proves to be a bit more demanding than Andrew, or any of us, could ever have imagined.

Through brutal fear, intimidation and enough name-calling to make any bully blush, Fletcher forces Andrew to reject anything but greatness and perfection. But Teller attests that for an artist, no matter how much practice is put in, perfection is simply an illusion.

“There’s very few times in the movie where my work ever feels validated or if I’ve ever felt like I’ve succeeded at any point,” he explained. “It’s just a constant journey, but that’s the great thing about art: there is no perfect.”

And it’s true. Throughout the film, no matter how much blood he spills—yes, music school really is that brutal—Andrew’s efforts are never enough in Fletcher’s eyes. Whiplash embodies this ongoing dual between Andrew’s fear of letting himself down and his fear of letting Fletcher down, becoming a constant psychological tug of war as the student struggles to reach the nonexistent top.

Chazelle depicts the psychology of perfection through both Andrew and Fletcher’s perspectives—as they both have wildly different opinions on the matter—and their individual wants and needs become dangerously entangled.

As Teller simply put it, “Fear drives preparation, because you are so afraid of failure that you are going to prepare and do as much as you can for something.”

Chazelle complicates it, however, because as Andrew does the preparing, Fletcher enforces it with what some may call questionable tactics.

But where does Fletcher’s ferocity and need for his student’s perfection come from? As any good storyteller will, Chazelle paints Fletcher with many colors, making him an unpredictable force of nature in Andrew’s world.

Simmons, who never considered Fletcher as the archetypal villain, said, “The level of terror that Fletcher inspires in his students, the goal of that obviously and the thing that they will be most terrified of in life, would be disappointing him. Obviously it’s a brutal and horrible way to teach and to live, which is kind of a chicken and the egg thing as to why he’s such a miserable son of a b*tch.”

Teller, a self-confident and outspoken 27-year-old, is a bit more forgiving of Fletcher’s teaching methods. “[Fletcher] is trying to inspire greatness, and he thinks that society has developed a culture of giving everyone a medal no matter what place they finished in,” explained Teller. “And he thinks that’s kind of watering down a competitive atmosphere. I don’t think there’s anything wrong with competition. I don’t think there’s anything wrong with somebody wanting to be the best.”

Having been a part of both the short and the feature, unlike Teller, Simmons got to see Chazelle evolve as a filmmaker with “an elevated level of self-confidence and self-assuredness as a director of actors,” as Simmons described.

This comes across in flying colors, seeing as Whiplash is entirely a performance piece—and not just in terms of the acting, which fills the screen with intense authority—with Chazelle’s performance, the performance of the editing with the unpredictable jazz charts and, of course, Andrew’s performance for Fletcher.

“For the first time in [Andrew’s] life, he’s really inspired to be great at something that he has an incredible passion for. The only thing this guy cares about is becoming the greatest drummer of all time,” said Teller.

As the hummingbird beat of Andrew’s drumsticks picks up and Fletcher’s conducting urges him to beat harder and faster, we see a boy opening his eyes to what being the best means and costs. For Andrew, he just has to ask himself: is it worth it?

Whiplash releases in theaters on Friday, Oct. 10, 2014 in Los Angeles at AMC Century City 15, ArcLight Hollywood and The Landmark. It releases in New York at Lincoln Plaza Cinemas, Regal Union Square 14 and Cinemas 1, 2, 3.

Click here for all showtimes and ticketing purchase information.