Failure to Launch: Despite the Title of his new Flick, Matthew McConaughey has No Trouble Leaving the Safe Zone 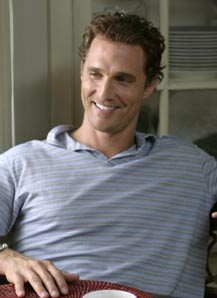 Frequently compared to Hollywood legend Paul Newman thanks to his good looks and powerful acting chops, Matthew McConaughey has spent the past decade proving to America that there’s more to him than just a buff body.

After playing bit roles in films like Angels in the Outfield and Dazed and Confused, McConaughey proved he could handle the pressures of superstardom with his powerful performances in A Time to Kill and Amistad. However, his appearance is hard to ignore, and with millions of women drooling over the now 36-year-old it wasn’t long before Hollywood created their own box office match-made-in-heaven by casting McConaughey in the romantic comedy.

Coming off the success of How to Lose a Guy in 10 Days – not to mention his recent crowning as People Magazine’s 2005 Sexiest Man Alive – Paramount cast McConaughey as the male lead in this month’s romantic comedy, Failure to Launch. In the movie, McConaughey plays Trip, a thirty-something man who still lives at home with his parents. When he falls in love with a woman (played by Sarah Jessica Parker) who’s too good to be true, he suspects she was hired by his parents to get him out of their house.

While it would take more than simply living at home with his parents to keep any girl away from McConaughey’s southern good looks and Texas drawl, the low-key leading man sticks up for people like his current onscreen persona.

"I don’t think it’s right or wrong; it’s different for different people," McConaughey told the Pioneer Press when discussing individuals who continue to live at home well into their adult years.

But don’t worry, ladies – McConaughey doesn’t live at home with mommy and daddy anymore. While he may admit to calling his mom, Kay, every Sunday, McConaughey has been standing on his own two feet now for quite some time. Despite being attached to some of Hollywood’s biggest leading ladies – from Sandra Bullock to Ashley Judd to his current flame, Sahara co-star Penelope Cruz – McConaughey has yet to make that trip down the aisle. So what’s the problem? (Not that single female America is complaining.)

Being one of Hollywood’s most eligible bachelors (sorry Ms. Cruz – there’s no ring on your finger yet), McConaughey admits that there’s a number of bad habits the opposite sex has that drives him nuts on a date. And while it may sound like the perfect-looking actor may be too picky when it comes to finding his perfect leading lady in life, what really drives the 5’ 11 3/4’’ hunk crazy isn’t a woman who calls every five minutes or redecorates her boyfriend’s bachelor pad, it’s something much more simple.

"It’s the one where everything’s silent – maybe you are reading a book, maybe you are just watching a movie on TV – and you feel the woman’s eyes on you," he says. "So you look over and she asks, ‘what are you thinking?’ I can’t stand that one! There’s no right answer, even when you aren’t thinking about anything. Then you have to think of something, but all you end up doing is talking yourself into a problem."

While McConaughey may not have to worry about discovering the annoying habits the woman in his life has anymore – he and Cruz have been an item for over a year now, and the two couldn’t seem happier – the actor does have things other than marital bliss to worry about. After winning People’s coveted title of Sexiest Man Alive, the one-time action/drama star now has to worry about being pigeonholed in Hollywood as the pretty boy.

It’s no surprise that Hollywood likes to typecast its leading men, and McConaughey definitely has a following in the romantic comedy genre (despite starring in nine films since 2000, 2003’s How to Lose a Guy in 10 Days is McConaughey’s biggest hit of the millennium). However, McConaughey doesn’t seem too worried about crossing back over into the drama field. In fact, the Texas native is rumored to be attached to several different movies currently in pre-production, but only one of them, Dear Deliah, is a romantic comedy. Even the upcoming film The Loop, which co-stars McConaughey’s real-life flame, is a dramatic thriller.

"I don’t see it as ‘going back’ and doing a drama," McConaughey states. "I enjoy making different types of movies and the way I see it is if you can do something once well you can always go back and be good at it again. Whenever you see somebody doing something and you think they are a good actor one time, if they are good once and not again it’s not because they’ve lost their talent, it’s because you just may not like the choices that they make."

While staying away from the genre he’s currently the most successful in might seem like a risk – not to mention working alongside the love of his life (Tom Cruise and Nicole Kidman in Eyes Wide Shut, anyone?) – McConaughey isn’t too worried about the direction he’s taking his career in.

"If you want to be in this business you need to take risks," he says. "When those windows of opportunity open up take them because they close very quickly. You need to show up with the goods. A lot of people try to be like someone else when they get started in this business and that’s a dead end. There are no help wanted signs in Hollywood – the guards at the gates are kicking people out, not letting people in. You need to be able to present your own point of views because that’s the only thing that gets people excited in this business – when they see something that they haven’t before, the possibility of seeing success. I see so many people entering this business saying ‘I want to be the next so and so’ and that’s just such a bad career move. It’s even a bad journey, personally."

With a new film hitting theaters Friday, a bunch of potential blockbusters on the horizon and his girl by his side, it seems like life’s pretty good right now for People’s Sexiest Man Alive. So is there anything wrong with being Matthew McConaughey?

"There’s nothing too hard about being me if that’s what you are talking about," McConaughey replies with a laugh. "To be fair, there’s a lot of tougher things in the world than just being me."

Failure to Launch releases in theaters March 10.
Article posted on 3/7/2006
This article has been viewed 3233 times.