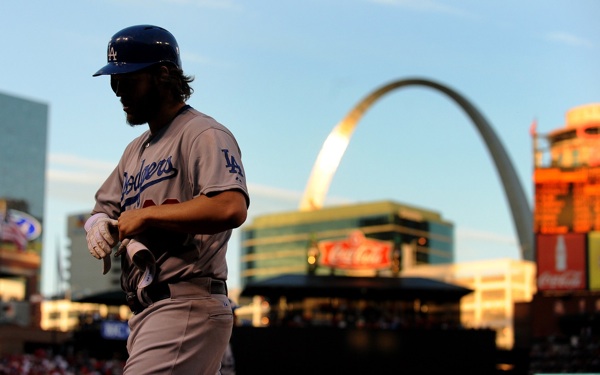 No one had to tell Clayton Kershaw that the playoffs mean everything.

"It's a whole new season," the Dodgers pitcher said. "And nobody cares about what you did in the regular season."

Just last week, Southern California baseball fans were buzzing about a potential Freeway Series, a long-awaited World Series meeting between the Dodgers and the Angels.

The teams entered the postseason as champions of their respective divisions, the Angels boasting the most wins in Major League Baseball and the Dodgers stocked with the league's priciest roster.

Oddsmakers listed them among the favorites to win it all, but any hopes for a title showdown along Interstate 5 ended in hurry as the upstart Kansas City Royals swept the Angels out of the playoffs earlier this week.

The end came just as painfully, and almost as swiftly, for the Dodgers, whose season finished Tuesday night with a 3-2 loss to the St. Louis Cardinals.

"They were better than us this series," Manager Don Mattingly said. "When we needed to get things done, they got it done."

Local fans might be excused for feeling particularly disappointed, wondering how their dreams crumbled so suddenly.

In 2000, New Yorkers got their "Subway Series" between the Yankees and Mets. The Dodgers and Angels have never met in the World Series.

The last few seasons, the teams have bolstered their rosters with considerable star power, the Dodgers including the likes of Adrian Gonzalez and Hanley Ramirez, the Angels with former league most valuable players Albert Pujols and Josh Hamilton. But people in and around the game looked past that to see weak spots.

"It gets tough in October," said Alex Cora, a former Dodgers infielder who is now an ESPN analyst. "The deeper the team, the better they are going to do."

From the start, depth figured to be an issue, especially for the Dodgers. Their $240-million roster ran thin in places, especially with the relief pitchers who surrendered crucial runs all season long.

Also, it was no huge surprise when the mercurial Yasiel Puig slumped at the plate against St. Louis and was ultimately benched in the deciding Game 4. He had struck out in eight of his previous nine at-bats.

"Coming into the series, the Cardinals were a more complete team and their bullpen was a lot more solid," Cora said.

But few predicted that Kershaw — who figures to win his third National League Cy Young Award and perhaps the MVP award in coming weeks — would struggle not once but twice.

The left-hander fell apart in the seventh inning of Games 1 and 4, continuing a history of subpar performances in the playoffs. St. Louis rookie Kolten Wong, whose tiebreaking home run won Game 3, said that he and his teammates studied Kershaw and tried to be aggressive at the plate.

The long ball played a role as the Cardinals scored their last 11 runs – from late in Game 1 until the end — by home runs. Those offensive fireworks added up to a 3-1 NL division series win.

Other factors figured into the Angels' getting swept in their AL division series after finishing the regular season with 98 victories.

Losing pitchers Garrett Richards and Tyler Skaggs to injuries in August certainly hurt. The team also fell into a slump at the worst possible time, with star center fielder Mike Trout — who's favored to win the American League MVP award — and left fielder Hamilton failing to contribute much at the plate. The Angels hit .170 as a team and scored only six runs in the three games against the Royals.

In addition, Manager Mike Scioscia made some questionable moves, calling for bunts in key situations and sticking with designated hitter C.J. Cron in the final two games.

"You don't go in with any badge saying you won the most games, and you're certainly not going to get any points for that going into the playoffs," Scioscia said. "We did a lot of things well during the series. We just didn't finish some games off."

The Royals, who had become fan favorites after rallying to win a wild-card playoff game, made big plays at crucial moments, especially in the first two games when they won in extra innings.

Any Angels hopes of extending the series were dashed in an 8-3 loss that saw Royals center fielder Lorenzo Cain rob Pujols and Howie Kendrick of hits.

"Anything happens in the playoffs," Scioscia said.

Maybe Southern California fans can take heart that their teams lost by relatively slim margins. The Angels had those two 11th-inning defeats. Two of the Dodgers' three losses came by one run.

"This year, the games have been so close," Cora said.

One more thing: While championships can boost civic pride, losses don't appear to have as strong an effect.

"Fans may get depressed when their team flames out, but it's never long-lasting," said Orin Starn, a professor at Duke University who has studied sport in society. "Think of Chicago with the Cubs [who haven't won a World Series since 1908] . . . they don't seem to be any the worse."

If nothing else, Starn suggests Dodgers and Angels fans take solace in that old baseball axiom: "Wait till next year."