Me and My Nalge: Bottle Becomes a Campus Fashion Accessory and Personal Billboard 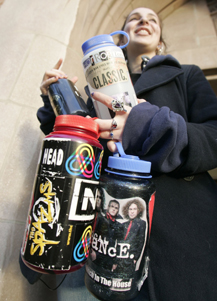 Allyson Kolan has six Nalgene bottles, most of them themed and covered in decals, stickers and random objects: Here’s her horror-movie Nalgene; another memorializes the music festival where she saw – omigod – Nine Inch Nails. Another bears tribute to a My Chemical Romance concert, including the penny, fastened with tape, that she found there.

What’s on your Nalgene? On today’s college campuses, you are what you drink from, and a flimsy Arrowhead throwaway just won’t do. Even in the silence of study hall, what you put on it screams volumes about you to anyone interested.

Somewhere along the way from simple thirst to obsessive hydration, the polycarbonate water bottle became a campus staple, a fashion marker wielded by students who’ve since gone a step further by personalizing their bottles with photos and stickers touting anything from Young Life, a Christian youth camp, to the indie band Death Cab for Cutie.

But the Nalgene bottle in particular has inspired a fanatical following, with cyber-disciples waxing aquatic about their "Nalge" on the Internet, "Nalgene bottle decorating" workshops at youth centers and kids who take the brand’s unbreakable reputation as a dare.

With college a time of self-definition, students are apt to bare souls on anything they spend time with: laptops, guitar cases and backpacks (now with water bottle pouches). It’s also a good way to keep track of your stuff.

"In my sorority, 70 people out of 80 have water bottles," says Molly Kane, whose blue widemouth Nalgene bears her sister’s company insignia. The logo is "a way to identify it."

The Nalgene story began a half-century ago with a humble laboratory pipette holder and other containers rumored to make swell hiking gear for company scientists. Years later, a company president took notice and, after his Boy Scout son used the bottles for everything from shampoo to pancake mix, Nalgene Outdoor Products came to be.

The 32-ounce gray widemouth with blue cap is the classic edition, but sizes now range from 16 to 48 ounces and, depending on the model, come in colors like sapphire blue, pretty pink and fire-engine red. Having tapped mainstream, the company has uncorked a few other liquid containers, too.

Seattle Pacific University, along with other schools like Bastyr University, have embraced the trend by offering students the chance to buy Nalgene-brand bottles festooned with the names of their alma waters. "I reorder every quarter," says SPU Bookstore manager Adina Shewfelt.

"Unless you’re actually scaling a mountain, I don’t know why you’d need a bottle that’s pretty much unbreakable," Shewfelt says.

And that’s the thing: While others emulate Nalgene’s bright colors and portability, purists claim nothing matches it for sturdiness. Students report seeing Nalgenes run over by everything from Daewoos to Ford Explorers and suffering little more than dents.

"One kid tried to smash his in the garage and ended up smashing the back window of his mom’s Lexus," says Nalgene Outdoor division spokesman Fernando Galiana.

Their celebrity has even spawned The Bottle Cult, bottlecult.tribe.net, an online group of Nalgene worshippers.

"My beautiful Nalgene with the beautiful Lotus Om sticker is nowhere to be found," writes one member who forgot her bottle at dance class. "I am a failure. I have shamed the tribe. "

Another member consoles: "While it is a deep loss to lose one’s Nalgene, it does bestow the rare and exciting opportunity to buy another."

And with popularity comes backlash. One Notre Dame student newspaper columnist scorned them as "clearly the coolest thing invented since the sleeveless shirt."

"It’s become a lot more of a fashion statement in the last couple of years," says University of Washington student Kari Thomas. "It makes me almost embarrassed to have one."

Distributed by Knight Ridder/Tribune Information Services.
Article posted on 3/13/2006
This article has been viewed 2229 times.