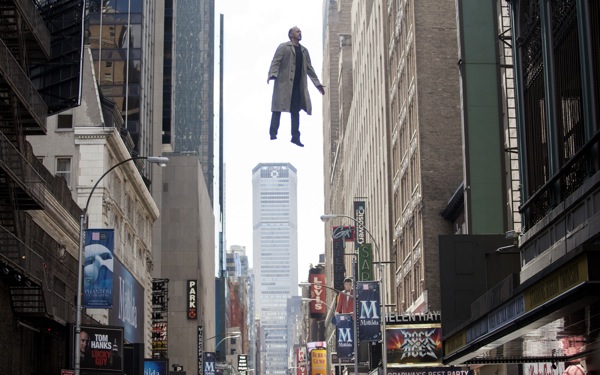 He hung up his cape in the closet, closing the door to what brought him his fame and fortune. An iconic superhero before the blockbuster franchises reaped billions of dollars, Birdman started it all. So what becomes of the man behind the mask? It’s all about starting anew and leaving the legacy of Birdman behind…if only Birdman will let him.

It all starts with Michael Keaton (Batman, Beetlejuice) as Riggan Thomson, the superhero icon of yesteryear that turns to Broadway to try to make a true artist out of himself. He may have an apathetic daughter (Emma Stone) as an assistant that makes him feel guilty about never being a present father, and he may have cast a lunatic as his co-star, but the only thing that stands in Riggan’s way is a little voice inside his head. Some might call it his ego, but the voice would call itself Birdman, and as Riggan’s dream of making it on Broadway proves to be harder than he thought, Birdman reminds him that it’s never too late to return to their glory days as real movie stars.

Taking a gargantuan leap of faith away from the sweeping dramatic cinema that we know and admire him for, director Alejandro González Iñárritu (Babel, 21 Grams) drops the heavy content and instead embraces a light wit and spirit that not only fortifies, but elevates his level of craftsmanship as an auteur of the modern age. Don’t be fooled, Birdman isn’t all fun and games—after all, Iñárritu can’t lose all that good grit—but man, it is the perfect example of art as entertainment.

On a fundamental level, Birdman is a story of egos constantly battling for power and validation. It becomes an entanglement of managers versus directors versus actors versus critics. They all boast dominance, but deep down, they are all terrified of being another meaningless blip on the world’s radar.

And to portray these egos, Iñárritu filled his screen with an effortless team of talent, most notably Edward Norton (Fight Club) as Mike, the infallibly pompous, yet exceptionally gifted theater actor that stars opposite Riggan in his play. It’s Norton as he’s meant to be, constantly testing Keaton’s Riggan and his dream with ridiculous grandeur about what it is to be a “true artist.”

Then, we are treated to a frenzy of other familiar faces, including the refreshingly un-Zach Galifianakis Zach Galifianakis (The Hangover), the always-dependable Amy Ryan (Gone Baby Gone), and a common but welcome run-in with Naomi Watts (Mulholland Drive). And this is just scratching the surface of Birdman’s talent, as every character is flush with rich texture and verve that keenly matches Antonio Sanchez’s wonderfully chaotic jazz score.

Of course, the real star power lies in Keaton himself. His portrayal of a man riddled with self-doubt and questionable sanity, paralyzed by the idea of being forgotten, draws an obvious comparison to Keaton’s own possibly fading celebrity. However, that comparison is immediately nullified as his innate charisma, especially in the moment where he faces the one critic that could determine the fate of his play, reminds us why he’s been a staple of American cinema for decades.

It is through Iñárritu’s camera that Keaton becomes redefined. Long, continuous shots that follow the characters through the sets of New York life feed us the frenzy of the Big Apple as seen by those who breathe Broadway. These long takes allow us to understand Riggan’s decomposing state of mind as he realizes that maybe his madness is his genius, and that maybe that’s what being a true artist is all about.

Enter to win a prize pack from Birdman by clicking here!