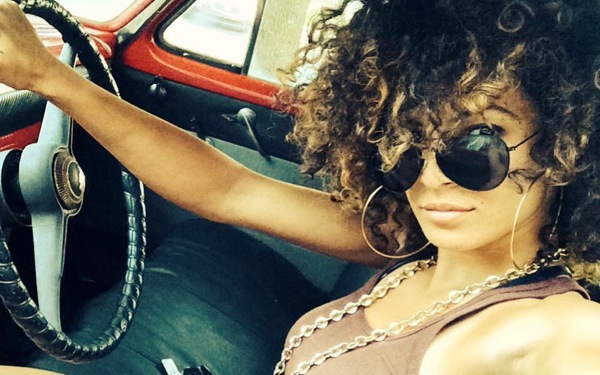 “Hey, girl! How are you?” Kandace Springs greets me on the phone as if we’ve been lifelong friends who are about to catch up on all of the trials and tribulations we mid-20s women go through in a quick 15-minute chat. She sounds laid back, personable and, most importantly, real. Talking to her is like talking to one of the girls. Little did I know, however, is that Springs’ realness in conversations translates over to her music as well.

Springs is a soul singer, and soul music is all about shedding the fakeness and allowing oneself to be 100 percent authentic while singing. As the 25-year-old describes it, soul music “comes from your heart.”

But, Springs isn’t just about revisiting the past and emulating the greatest soul singers of all time such as Aretha Franklin, Stevie Wonder and Etta James. Instead, she aims to combine classic soul with modern hip-hop, creating a funky, edgy sound that all generations—young and old—can groove to for years to come.

And people, including celebrities, are noticing this young musician’s talent.

After Springs performed a cover of Sam Smith’s “Stay With Me” and uploaded it to YouTube, she received the Tweet of a lifetime: seven-time Grammy Award-winning singer-songwriter Prince hit her up on Twitter and then asked her to fly to Minneapolis and perform at his legendary Paisley Park Studio.

She did (of course), and she has gone on to sing on the “Late Show with David Letterman,” and she recently released her self-entitled EP.

On Oct. 15 and 16, Springs will be opening up for R&B superstar Ne-Yo at the House of Blues in Los Angeles, a show she is clearly excited about.

Campus Circle: So, you’re opening for Ne-Yo in Los Angeles at the House of Blues, which is exciting!
Kandace Springs: Yay!

Have you worked with Ne-Yo in past?
I’ve only met him one time at the Capitol Upfront at the City Winery [in New York], and he closed the show. I have met him, but I haven’t performed with him or met up with him much. But, he’s a really nice guy from the few minutes that I did meet him, very humble and very talented and very legit too. What he’s singing and what you hear is legit.

So, this isn’t your first time performing in L.A. You opened for Chance the Rapper at UCLA not too long ago. How was that show? What makes the L.A./college crowd different from other crowds you’ve performed in front of ?
New York is definitely a lot more hipster, with a bit more urban kind of feel.

But the crowd out there [in L.A.] was just as awesome; they were all into it, cheering and singing along and stuff. They were all really sweet and cute in their little frats and sororities. I was like, “Awww!” (laughs)

Your soulful sound is unique and rare in today’s music scene, which is largely filled with pop music and EDM. What do you hope this younger demographic and your peers will take away from your style of music?
I’ve always been into soul music, jazz, and I kind of grew up in a gospel church…you know, Aretha Franklin...I want to keep that era of music alive for younger generations, to perform it in such a way that the younger generation can appreciate it but still keep that old soul, throwback salute alive. Does that make sense?

Yeah, for sure.
Yeah, it’s "classic soul meets classic hip hop" with a modern twist so that all ages can appreciate it. Your mom will be jammin’ out to it too!

It sounds like you want your music to be timeless.
Yeah, that’s the word!

So, how would you define “soul music”?
Honestly, it comes from your heart. You can kind of tell if someone is doing it from their heart or if they’re just kind of singing. It’s something that you feel inside of you, like realness. You can’t be fake, basically.

But some of the throwback soul, like Luther Vandross, it’s just a style of music that kind of comes from jazz roots in a way. But soul can be transferred to any genre: country, pop, rock—you can feel it when someone is singing.

So speaking of pop and mainstream music, what are your opinions on it?
I do like it. I can appreciate all music. Some of the current artists I’m really liking are Ariana Grande…Jhené Aiko is one of my favorites. And of course Bruno Mars […] I want to be out there with them too! (laughs) I have a big respect for them being out there and being able to reach so many people.

What song on your EP are you most proud of and why?
Dude, I like them all! If I had to pick one, it would be between…"Love Got in the Way” and “Forbidden Fruit.”

“Love Got in the Way,” I just like how it’s got more of a funky anthem and chorus that a lot of people remember. It’s just throwback soul—fresh, modern soul like Aretha.

And then “Forbidden Fruit” is…I grew up singing jazz. I like that "quiet storm" kind of feel. I listened to Sade and Nora Jones...I feel like “Forbidden Fruit” shows who I really am, where I started and my roots (vocally).

The other songs kind of bring out my other sides.

You're from Nashville, and you’ve lived in New York, but I’ve read in your bio that you consider yourself a Cali girl and that your song “West Coast” represents that side of you. Can you explain more on why you define yourself as a Cali girl?
Well, I don’t know if they told you, but I have a crazy interest in cars. I like to collect them, and I can fix them and stuff like that. So anyway, I moved out to L.A. to work with a producer a couple of years ago. I’ve been here a few times before that, but the weather, oh—beautiful! But there’s a big car culture out here as well. That’s one of the many reasons why I love it. That song’s [“West Coast”] got the Corvette in it, because I have one back in Nashville. I had the Corvette out here at one point and with the ocean and music, every weekend I’d go and hang out here.

I’ve watched some of your performances on YouTube, and I always love what you’re wearing. Can you describe your personal style?
I’m a big tomboy (after all, I love cars), but I’m feminine too. My stylist helps me with a lot of stuff. You’ll hardly ever see me in heels; I’ll wear like a tight, high fashion dress sometimes but with combat boots. Or, I’ll wear Converses with a cute crop top shirt and jeans. And I always wear the gold jewelry. My style is kind of "high fashion meets urban." That’s how you can kind of describe my music too.

Yeah, you can definitely see the parallel between your music and personal style.
Yessssss! Kind of like the “sexy soul meets the urban hip-hop.”

Who is a singer/performer you would love to do a duet with or collaborate with?
Between Lauryn Hill and maybe Sade or Alicia Keys…Ah! That’s like three people! (laughs)

As crazy as she is and as long as she’d be nice, maybe I’d pick Lauryn Hill. Her voice is just such an inspiration as far as the way I sing.

Being from Tennessee, a state that gave birth to successful singers such as Miley Cyrus, Justin Timberlake, etc., do you feel any pressure to achieve that same level of success and represent your home state?
I really just feel like whatever happens, happens. But I’m so determined. What you put in is what you get out. I don’t feel extreme pressure from it…but I guess I never thought of it like that, to be honest. But I’m really competitive; I definitely want to win.

Where do you see yourself in five years?
Hopefully, I’ll have a nice foundation for a lifelong career and doing things that I love to do, which is modern soul, and keeping it alive. I just want to be known as one of the soul artists, like Lauryn Hill—that legend that’s not going to go away anytime soon.

See Kandace Springs perform at the House of Blues on Wednesday, Oct. 15 and Thursday, Oct. 16!