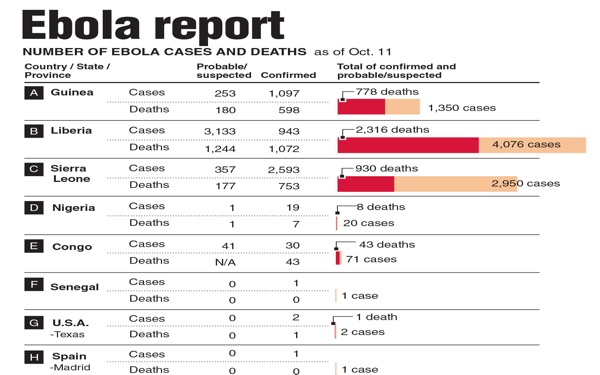 Map and chart showing cases of Ebola updated as of October 11
(Credit: MCT 2014 )

The Ebola outbreak has many people on edge and a little paranoid, which is understandable. However, should U.S. colleges be as paranoid when it comes to accepting applicants from West Africa, the epicenter of the Ebola outbreak?

That is now the debate as a Texas college allegedly rejected two Nigerian applicants and cited the confirmed Ebola cases in Nigeria as a reason for denying the applicants admission into the school, reports NBC News.

Abidogun told NBC News that he was "disappointed" about the school's policy, and another rejected applicant--Idris Bello, who is also Nigerian--called the policy "embarrassing."

Navarro's vice president for Access and Accountability sent the following email to CNBC.com:

Our college values its diverse population of international students. This fall we have almost 100 students from Africa. Unfortunately, some students received incorrect information regarding their applications to the institution [...] We apologize for any misinformation that may have been shared with students...

However, the school failed to clarify whether or not there is in fact a policy to reject applicants from Ebola-stricken countries.