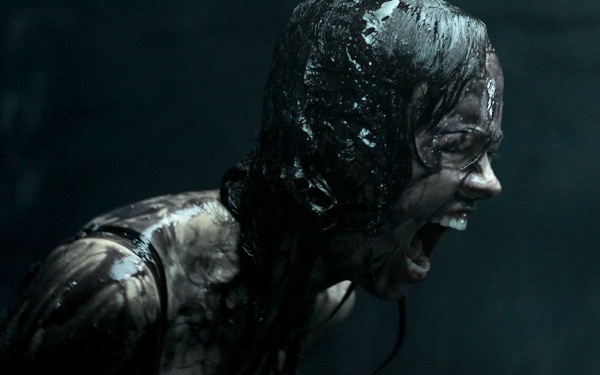 It’s back into the woods we go as we follow another group of hapless teenagers en route to a blissful weekend full of the usual pastimes: drugs, alcohol and a couple of alien abductions just to keep things interesting.

At this very basic level, all of these horror films of late start to sound the same, but directing duo The Vicious Brothers (Grave Encounters, 2011), consisting of Colin Minihan and Stuart Ortiz, sought out to take their latest sci-fi horror flick down a dirt road less traveled. With Extraterrestrial, which debuted at this year’s Tribeca Film Festival, they build up the foundations of every “cabin in the woods” story we know, only to slowly chip, chip, chip away at it until it becomes its own—or at least tries to.

It all starts when April (Brittany Allen, All My Children) has to go to her family’s cabin to take pictures of the property so they can put it up for sale. Of course, she decides to make a weekend of it by taking her boyfriend Kyle (Freddie Stroma, Harry Potter and the Half-Blood Prince) and two friends for one last hurrah. Quickly, the booze starts flowing and the joints start burning, but surely enough, the fun and games come to a close when they see something in the sky suddenly come crashing into the nearby woods, and someone—or something—comes out of the wreckage.

From here on out, the gang has to figure out exactly what these extraterrestrials want, and luckily they have Travis (Michael Ironside, The Machinist) a Vietnam-vet-turned-weed-dealer nearby to fill their heads with enough conspiracy theories to convince them that aliens are invading and are out for blood.

Written by both Vicious Brothers but directed only by Minihan, we see a keen familiarity with the usual tropes of both alien flicks and cabin horror stories. In Extraterrestrial, there is appreciation of the overdone, the cheesy and the cliché, although sometimes it may be too much of it to be determined as self-reflexivity. Actors aiming for parody often end up looking like bad actors, and one-liners that should be more self-deprecating only come across as bad writing.

Especially important for any film with sci-fi elements, the quality of special effects is inextricably linked to how us viewers are immersed into the world on screen. Luckily, Extraterrestrial utilizes some commendable use of effects to create a believably unbelievable event, perhaps with the exception of the aliens themselves.

The film's real strength lies is in its ending, which is often the downfall in horror movies that hastily throw in convenient plot resolutions. We quickly realize that the plight of April and her friends is much bigger than themselves and on a very global level. It’s as if Minihan and Ortiz take the microscope and, as the film goes on, slowly zoom further out until we see really how helpless these kids were all along.

It seems, however, that all of Extraterrestrial's saving graces have still been done before and done better, most notably by Drew Goddard and Joss Whedon in the phenomenal The Cabin in the Woods (2012). It is without much doubt that The Vicious Brothers looked to the latter film for inspiration. Unfortunately, the aspects of parody, the grand reveal at the end and the actual elements of horror themselves are organically unoriginal.

And though it is a refreshing turn from classic modes of horror storytelling, Extraterrestrial lacks a truly unique spirit to stand up to the genre's titans.

Extraterrestrial will be available on VOD Friday, Oct. 17, 2014.